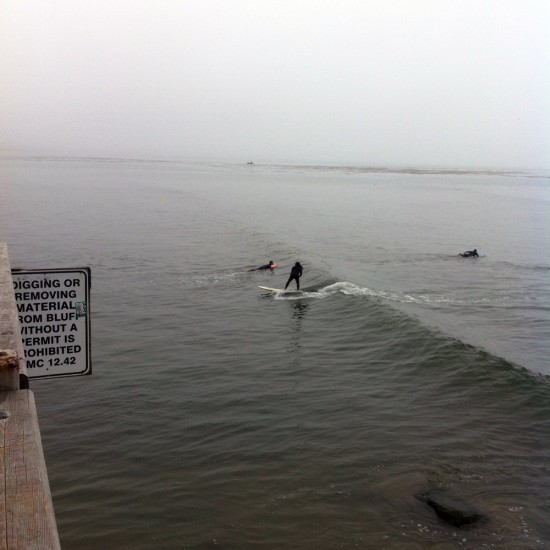 My first wave of the morning. Photo by Max.

Got there early to get parking for a Saturday morning. Our new thing is to drive the few minutes to the break to find a spot, then have our coffee, sandwich, banana at the beach before heading out. Waves looked really soft so we had low expectations. But again, just as soon as I paddled out, I got a mellow inside wave that was small but had enough power to ride a nice right. The R.Schmidt surf school was out and they pretty much blocked most of the main peak by the cove, but since the students didn’t know when to paddle, and surprisingly, the instructor just talked through most of the waves that they could have gotten, I was able to pick off another three rides when the sets came through. All were smaller than yesterday but nothing beats waves to start the day! I’d woken up with a slight scratchy throat and a partial runny nose, but the surf seemed to clear that up. Max was on his Harbour and had one wave where he stood up. Yes! His foot is on the mend. It was also apropos that we parked in spot #169 again for my 169th surf sesh :)