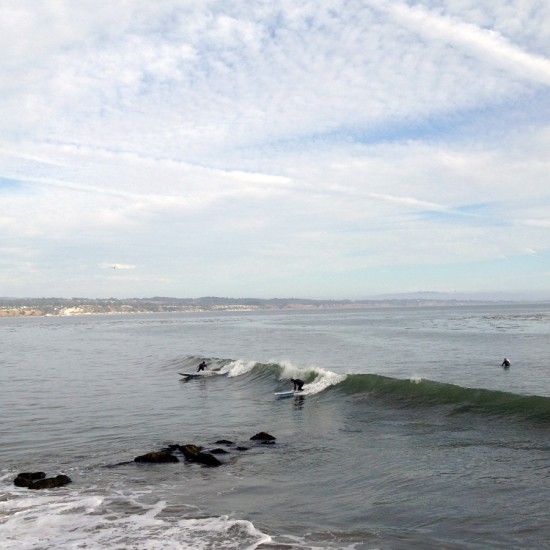 Should have waited a couple of hours later when it looked like this.

Yesterday was still holding up at high tide but today turned out to be a different story. The main peak was taken over by a huge group from R.Schmidt surf school. Even for a Sunday, it was a huge group. I tried the same spot as yesterday by 2nd jetty to avoid the masses but had the opposite luck today – wiped out a few times on the too steep section of the wave, tumbled, and later got caught on the inside during a giant set. Really should have made the first one if I hadn’t hesitated on the popup. Max said it was big and broke on top of me. Today was unlike any session since I’ve been in SC and felt like my early newbie days at Linda Mar. Heh. It’s all part of surfing. Max had better luck with his Firewire on the inside curl of 2nd jetty but then had a rough moment near the end when his foot was wrapped around a fishing line that was hanging off the esplanade/cliff. Yikes. So, I’m thinking, tomorrow – low tide and my 9′? Yes, please.