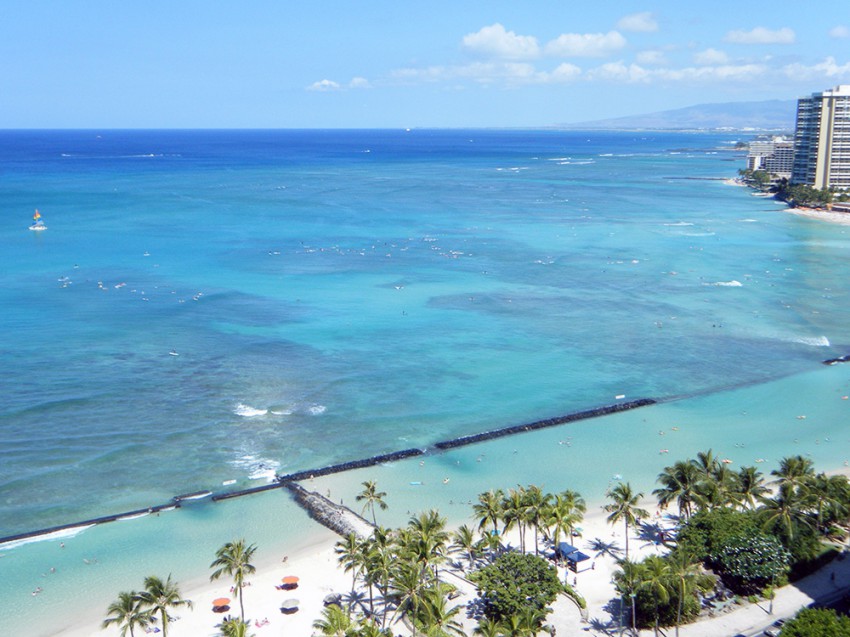 Arrived in Hawaii yesterday after a two year(!) hiatus. So good to be back. Some nice SSW this whole week and yesterday there were more lineups than I’ve ever seen stretching as far as the eye could see in every direction! Had the pleasure of watching the surf action from our 24th floor lanai and could see the spots far on the outside with offshore peaks. Paddled out this morning on the green Mitsu for the first time and it felt great. The board is so responsive, even more so perhaps than the 9′ white Mitsu I used to ride. The water was ridiculously warm and relaxing. Usual crowd on the outside of Canoes but we both got lots of fun rides. After being in Capitola for almost a year, it was satisfying to return to our original surf spot and feel competent. Reading the waves here was different though, as it rolled in slower before breaking. I followed the lead of the Asian woman surfer who caught lots of waves, paddling when it was barely forming and catching it was it broke inside at the next reef. Waves were smaller today than yesterday but still had some decent power. I got a couple of long ones from the outside, weaving through with one going left a bit near the end. Stayed out for two hours until I realized my knees might be getting sunburnt and it was time for lunch. Aloha Waikiki! Stoked to be back.