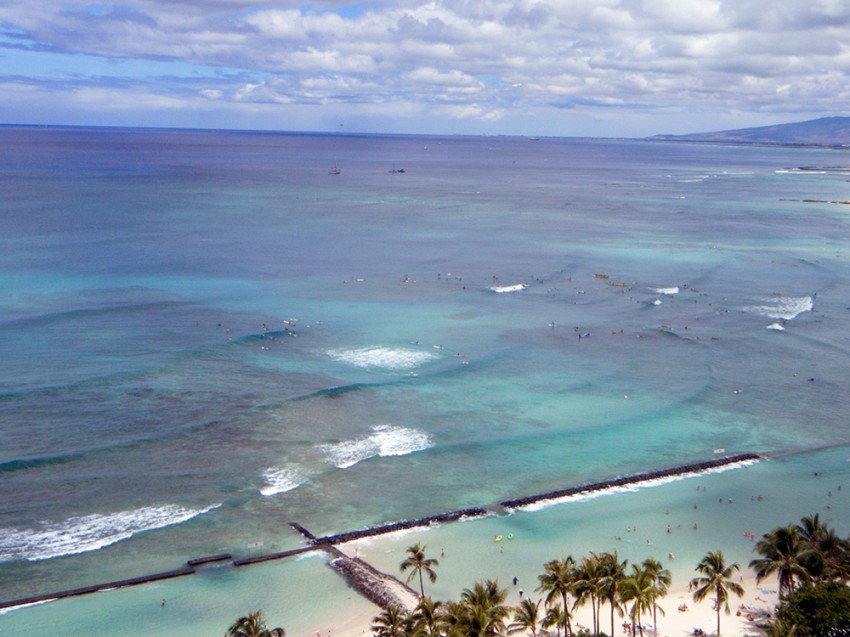 Woke up and stood out on the lanai for the surf check (could definitely get used to this). Psyched to see the swell continuing. A bit smaller than yesterday but clean. Slightly overcast skies. Unfortunately, we couldn’t just head over to the break. My knees and thigh were still pretty sunburned from yesterday even after lots of aloe. Needed some Xcel UV leggings (should’ve brought mine from before) and turns out all the Xcel retail stores in Honolulu have closed. Miraculously found some from Girls Who Surf and cabbed to Ward Center to pick them up. Fueled up and finally paddled out in the afternoon. Once outside a nice set came through and we both caught two good waves. The waves here rise up more gently without indication of size, then roll up and break with power. Rides are faster, though shorter than Santa Cruz. After those first waves, we hit a long 30+ minute lull. Nothing was breaking on the outside and everyone moved closer and closer in. Even over at Queens, the lineup was closer in than I’ve seen it. At some point the waves started picking up again, small bumps that rolled in then broke and sprayed at the next reef. I got some really fun fast ones, including my favorite long right close to the curl, forced to turn faster to avoid the three surfers on the inside. There was some wind and texture on the face and my board skipped against the surface a bit. Another ride had a seemingly steep face and I had to lean my weight forward to break through the peak and down the face. Sped down and retained control. So fun. The lineup was the usual hodge-podge mix of locals and tourists. There was the fit Hawaiian guy who caught every wave even when it didn’t even seem like a wave was approaching. The Dad and kid with the GoPro. Mohawk local guy. I finally asked him how he keeps his hair perfect in the water and laughed when he said, “I usually try to just not get it wet. Sometimes that works better than others.” Stayed out for two hours and paddled in salty and stoked!