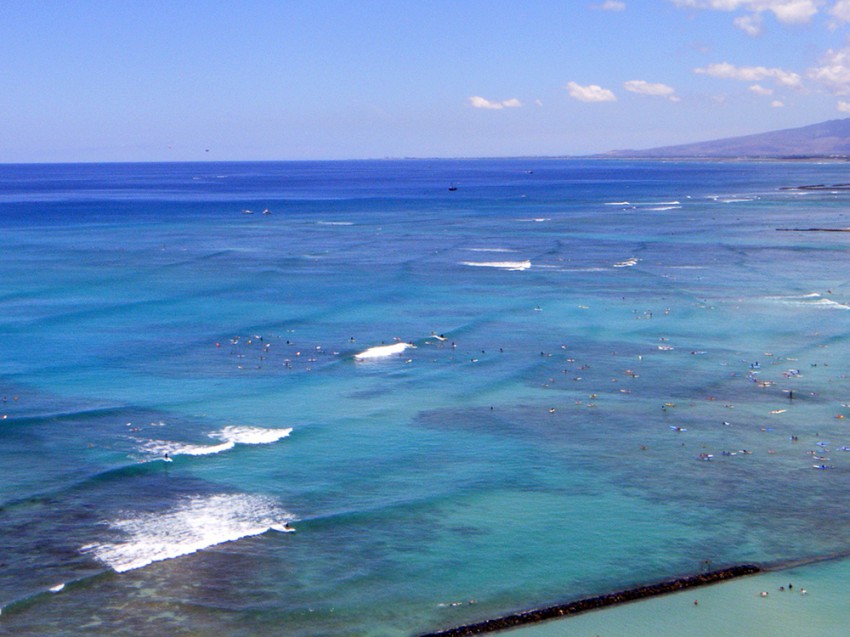 Had a fun last session today! After watching the surf from the lanai while we ate, I decided to not spend time waiting on the outside through lulls, but go for the waves closer in. Turned out the spot was lined up to the left tower and the point. Had some good luck there and caught wave after wave. Felt dialed in today whereas yesterday the same spot seemed overcrowded and waves impossible to read. Today, I could see the waves roll in and if the outside surfers paddled for it and missed it, it would steep up and be perfect to catch. After some early rides, by the third or so, I was positioned right on the peak and caught a nice long left. Some of the waves were bumpy on takeoff and you could see waves rolling in and the current back out from the beach. Made it all the more fun. Had a wacky bump-on-the-face ride and dipped way down to catch it. Two local guys on foam boards were also catching waves near me as well as a boy and his Dad. Shared a nice left with the kid who was so stoked afterwards. “Was that a left? I’ve never gotten a left!” he shouted. That excitement never goes away with surfing. I still remember my first ride here in Waikiki from the lesson with Phil, stood up and rode it straight and thought, wow, I just rode a wave like generations of surfers have, including Duke and Eddie Aikau. This trip to Waikiki after a two year hiatus was definitely special: the dramatic view of so many Waikiki breaks (Queens, Canoes, Pops, Threes/Fours, etc) from the 24th floor, watching surfers catch rides at all hours of the day, and the indescribable feeling of surfing waves in warm Hawaiian waters. Still want to live here someday. A hui hou, Waikiki!