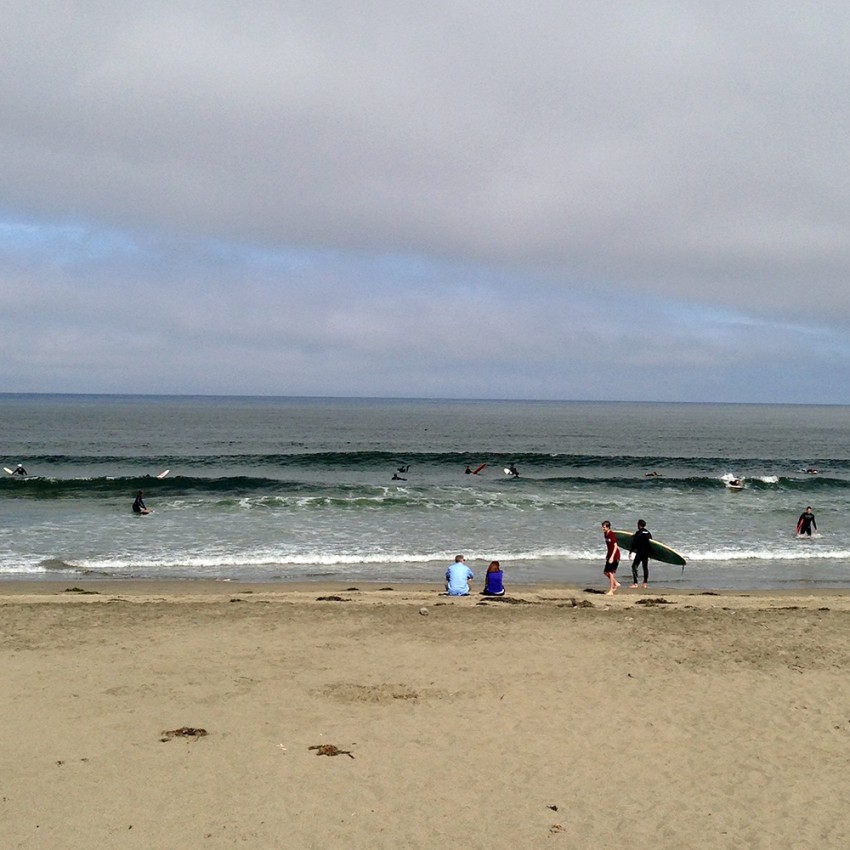 The word in the lineup yesterday was that the swell and period would increase a bit today but seems it diminished some, though it was pretty glassy. Small lines broke near shore when we arrived on a rising to almost-high tide. Lots of weekend surfers lined up everywhere. We watched who we thought was Bill (later realized it was the guy with the swirly green board) catch lots of inside lefts. He had a fast tail turn and almost made it to the nose a few times on waves that were in barely any water by shore. By the time we headed out, there was some texture and a few more closeouts. Knew it was one of those take off and turn days and was pleased to get two lefts and a right between TB and the pumphouse. After that, it was mostly paddling for ones that didn’t break or avoiding closeouts. We made our way farther north as the session progressed, but I seemed to be either too deep or too far out. Then on one of the best waves where I could have gotten a left, I somehow wiped out. Of course, Dave was on his way back out and probably saw me kook out. Haha. I usually don’t care about things like that but today it annoyed me and the more annoyed I got, the fewer waves I caught. No surprise there :) I did manage to get one good left where I really bent my back knee down to see how that felt. I was a bit grumpy at the end and Max had to remind me that he’d seen me get some good ones early on. Thank goodness for that reminder because I had practically forgotten! When we lived in Capitola, I felt like every session and every wave made me better. Here, I have to remember to stay patient and realize that the conditions are going to dictate how good I get. Still considering finding a coach up here or in SC to keep progressing. Afterwards, we ate some fruit and headed over to Outer Sunset for noodles and a return visit to Aqua for the used Harbour Spherical Revolver for Max, who wanted to try a transitional 8′ board. Ooh, can’t wait to see how it rides.