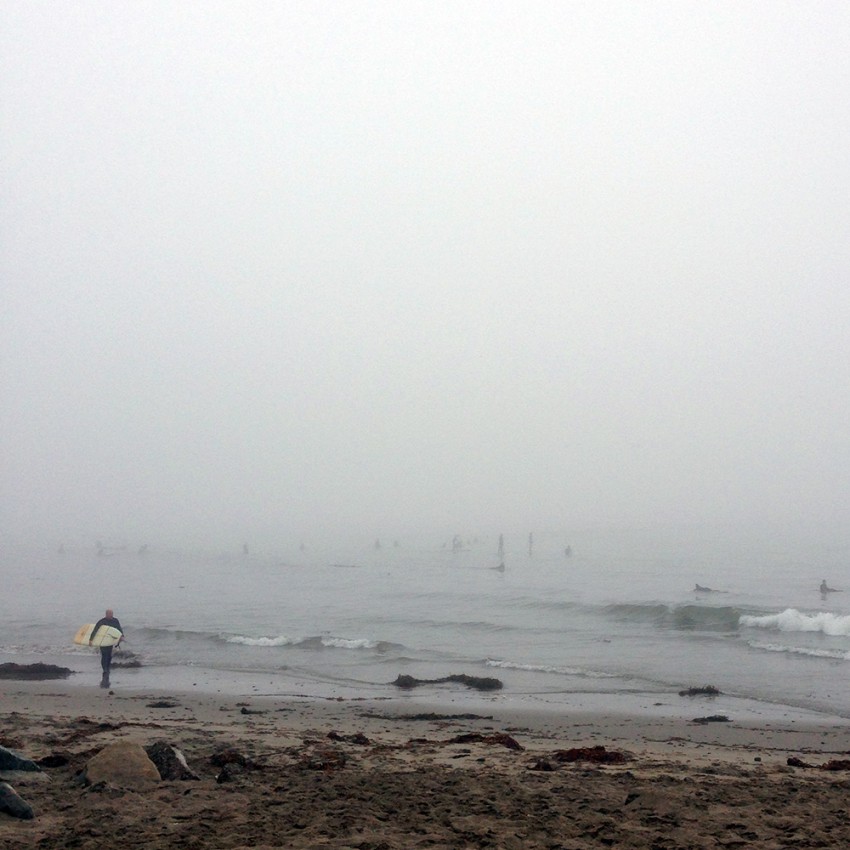 Hadn’t surfed in three days so I was determined to get down to Capitola early, even if it meant getting up around 6am on a Saturday. Swell wasn’t supposed to be epic, just 1-2′ @ 14s and the first WNW of the season, which is great compared to under a foot as it’s been this week and supposedly returning to on Monday. Thick fog enveloped everything as we approached Santa Cruz on Highway 1. The beach was covered and you could barely see the surfers and definitely not the horizon. Tide was rising past 3′ so the waves were breaking pretty close in. We ate and suited up. By then, much of the crowd had left and it was just a few SUPs and a handful of surfers. We paddled to the outside as a lone, bigger set wave rolled in. The guy on the red longboard tried for it but didn’t quite catch it. The ocean smelled different than the red tide from last week. More fishy. Overhead in the sky, the bird activity was crazy. Sea birds flew in swarms back and forth over the ocean all the way to the wharf. The marine layer had lifted from the surface and hung in the sky, creating an illusion that it was more evening than day time. The water was unlike anything I’ve seen at Capitola in the last year and a half – warbly, jumbly waves rolled in with doubleups and bumps everywhere, but it was still glassy, gray from near to the horizon making it hard to see the size or shape. I got a sense of what it would be like to need glasses from trying to watch for waves today that came in. Lots of different bumps. The peak that shifted farther south on this WNW. We lined more to the south of 2nd jetty at the start, and moved farther south as the sesh progressed. Got some super fun rides. At the beginning, one HH+ left that Max witnessed on his paddle back out. He said I made the takeoff and was already going left with the wave over my head. I could see the spray over my left shoulder. Then realized I was heading for the inside of 2nd jetty (underwater) and tried to at least angle right instead. Had to jump off that one and paddle back out quickly. Fun fast wave. Had to look for the steeper waves that rolled in from the outside, paddle hard through the bumps, then be prepared to turn and go right quickly to maximize the ride and kick out before getting too close to the cliff/beach which was covered with the rising tide. There were a few good fast rights from the middle once I figured out where to catch them and which ones to go for. Later, the first two SUPs and the two guys split and we were joined by the guy that grew up in Manresa who was catching good ones on his SUP). We shifted farther south where the French guy had been lined up. After paddling for a couple that didn’t pan out, he put his hands up. “We got to try anyway, right?” Absolutely. I was stoked to get a few good rights over there too, just on the inside of a kelp bed. Takeoffs were fast and then my favorite part – zipping down the line with the wave to my right and the cliff/beach to the left and judging how far down I could get before safely kicking out. So fun. But man, it smelled funky over there and I would paddle back out as fast as possible. Got to see the Manresa SUP guy catch a good one on my paddle out. He came powering down the line, then disappeared behind the wave as I went over. Always wish I had my GoPro on a head-mount or something for those shots. Then there was the one where I popped up and was about to turn and got chonked by the kelp, which stopped by board completely and I went flying over the front. Happened so fast I didn’t cover my head or anything and luckily, came up unscathed with my board behind me. Eek. By the end, it was just the French guy, Max, me and the SUP. The tide had risen and the backwash was hitting the wall by the beach and the water was textured, rolling. The birds were still flying overhead. The fog was still above us and over the whole ocean, but to the very far south horizon, a spot of sky had cleared and the sun glared brightly in contrast. An otherworldly sesh.

#275 / 9:50am / 8′ Revolver
[Regional Summary: Jumbly surf prevails this morning with WNW groundswell (280-300) building and SW wind putting some crumble on the water. The better breaks in town are in the 3-5′ range, while standouts are a bit overhead. Look for a bit more size through the morning as the swell fills in further and the tide also pushes. Variable onshore wind prevails for much of the day, but conditions should clean up this evening as wind trends out of the west. ]
1-2 ft
2ft 14s WNW (292°)
1ft 14s SSW (206°)