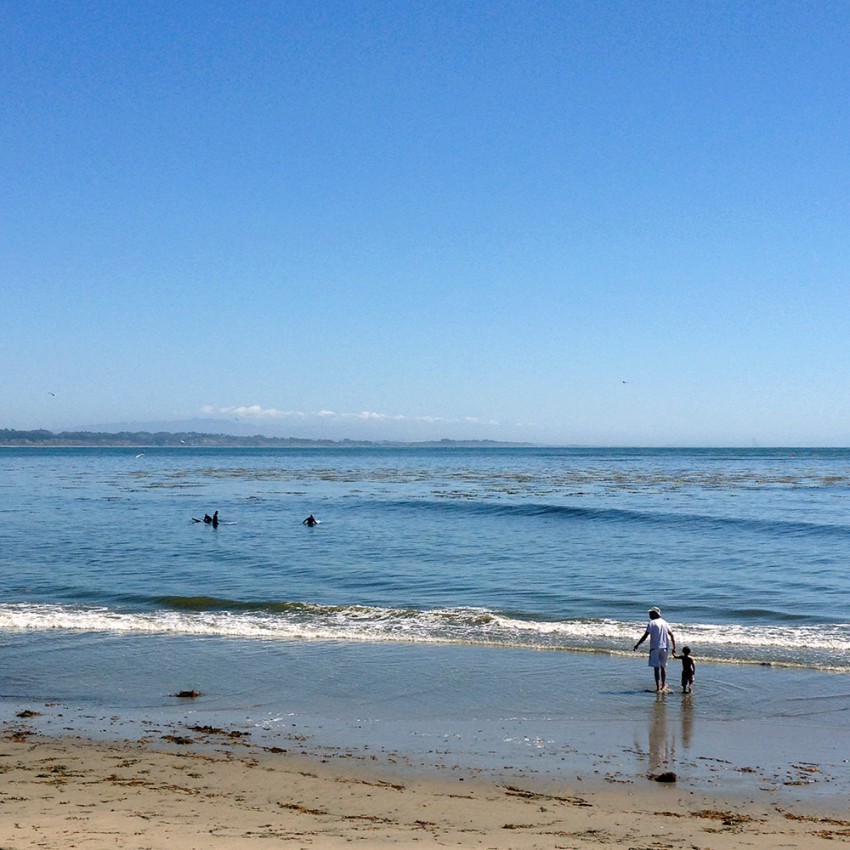 Before the wind came.

Headed down to Capitola to catch one last surf before this swell eases, to check out a little studio in the village that’s for rent, and to drop off Max’s dinged 8′ Junod at B&E. Made it out to the beach a little later than expected after doing everything. Still looked like there were some small waves slowly rolling through and just a few longboarders in the lineup by 2nd jetty. We ate and suited up and as we got ready, the wind had picked up. The ocean had turned to textured chop, really rare for Capitola. The waves were small but the sesh was made more exciting for me by the weird wind and constant spray. Salty eyes. Water was still a bit brown from the red tide. I went for a small rolling wave early on and caught a little slow motion ride to the right. The peak was definitely more lined up to 2nd jetty and the current pushed everyone south, and we had to keep paddling north. Good workout. I loved the weird waves today, so slow and small compared to the past Saturday/Friday/Thurs, but still so fun. Got caught in the kelp on a ride. Hands were constantly caught in kelp on the paddle out. Rode a wave crouched down on my knees with my right hand paddling next to my board to get some speed. Got blown off a wave by the wind once. Paddled for one and in front of me were pelicans and a labrador swimming. Got a really loooong one in and to the right as the Brazilian (?) shortboarder hooted as I took off. Thought he was the woman with the labrador the first few times he hooted, then finally realized she was a he. I had just caught a good wave and was standing on the inside waiting to paddle out and he ripped two turns right in front of me on the tiniest wave. “That was awesome!” I shouted. “Oh yeah! Woo! You’re getting all the waves.” he shouted excitedly with a thick accent, walking over to fistbump me. “Not like yours,” I replied. “That was killer.” “You just have to keep practicing!” he said, all amped. He was so stoked and so good. Having the time of his life in blown-out, small waves, just like I was. Then there was the slightly bigger wave that came through and the girl and guy had just gone for the first one. I was exactly at the peak, turned while dropping fast and zipped right. Yeahhhh.