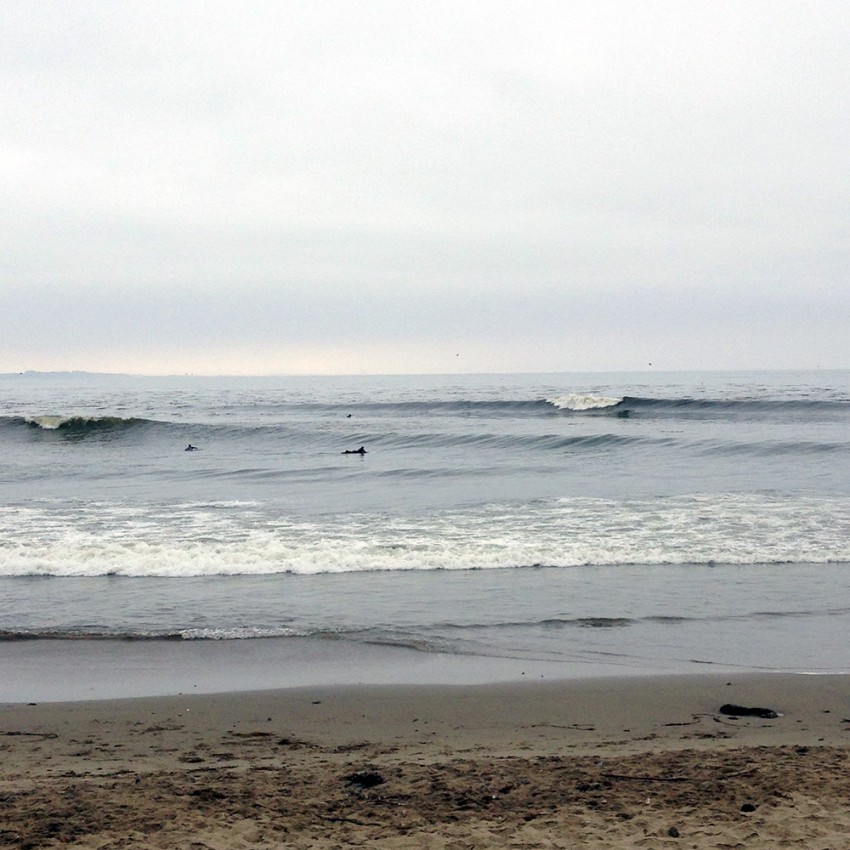 We’ve been waiting for this predicted first fall swell in SC for two weeks, checking Surfline to see if it’s still holding. The thing with Pacifica is that the predictions are usually wrong. After living in Capitola for 9 months last year, I know the predictions are almost always right for here. Saw that there were waves on the cam at 7 when I woke up and was already excited. Got down around 10am and approaching the esplanade for a surf check, I could see a big set was underway, with A-frames rolling in from the kelp and lots of sizable inside ones too, breaking close to the beach on a rising 3+’ tide. We ate from our beach-front spot and could see the higher tide was creating a lull between sets. As I suited up, I was thinking be cautious, don’t get caught on the inside, just paddle to the outside and see how it is. Of course, as soon as I paddled out, I started looking for wave opportunities :) It’s always cool to see the new faces at Capitola when a swell arrives and the better surfers show up that normally surf other spots. Today was no exception. The only familiar face was Tex, the super-friendly, bearded guy on the 12′ Pearson that we saw a few times last year. He later gave me a new nickname and would yell “110!” when I saw him paddling back out at the same time. So funny. Chatted with him about the overwhelming fishy/weird smell out in the ocean. There were about 12 other surfers out, a few shortboarders and male longboarders, one older female, and a guy and his girlfriend out for the first time… was a bit worried for them. The first one I got was off a wave that was breaking from the outside. I got a nice bounce off the foam and then went right down to the cove. Paddled back out with confidence. After that there were so many waves. Max said he saw me catch two of the biggest waves I’ve been on. “Definitely over your head,” he told me later. I remember making a steep drop and fast turn right high on the wave as I saw him paddling back out and made my OMG face at him for fun. Those outside, steep fast rights all the way farther south than I’ve been were fast and so long. Had the chance to react to the wave, pull up higher, see the wave right next to my face as I went right. Loved the paddle back outs too, watching other surfers rip down the line or make the drop. Today’s sesh encompassed every emotion – trepidation, determination to make the drop, confidence and adrenaline from riding the wave, challenging couple of wipeouts and moments of general kookiness (eg. not getting over the next set wave, getting pushed back and having my board shoot up!), so much water moving, tons of kelp and things floating in the water (paddled by two jellyfish), birds, sea otters, big waves steeping up and crashing into the beach. So much happened in two hours. Time stretched and filled by so much activity and emotion. At the end of the sesh, Max and I both caught waves in and ended our rides near the cove. We tried exiting from the beach there, but the high tide was really pushing water in and it looked hard to walk around 2nd jetty. During this time, Max’s board slipped and he dinged in and knocked his center fin off :( Had to paddle back out from there and to the beach. As I sat on the beach for a minute waiting for Max, the shortboarder that I had seen get a bunch of good rides on my paddle outs, walked by. “Not bad for Capitola, eh?” he said. Not bad at all! So stoked. 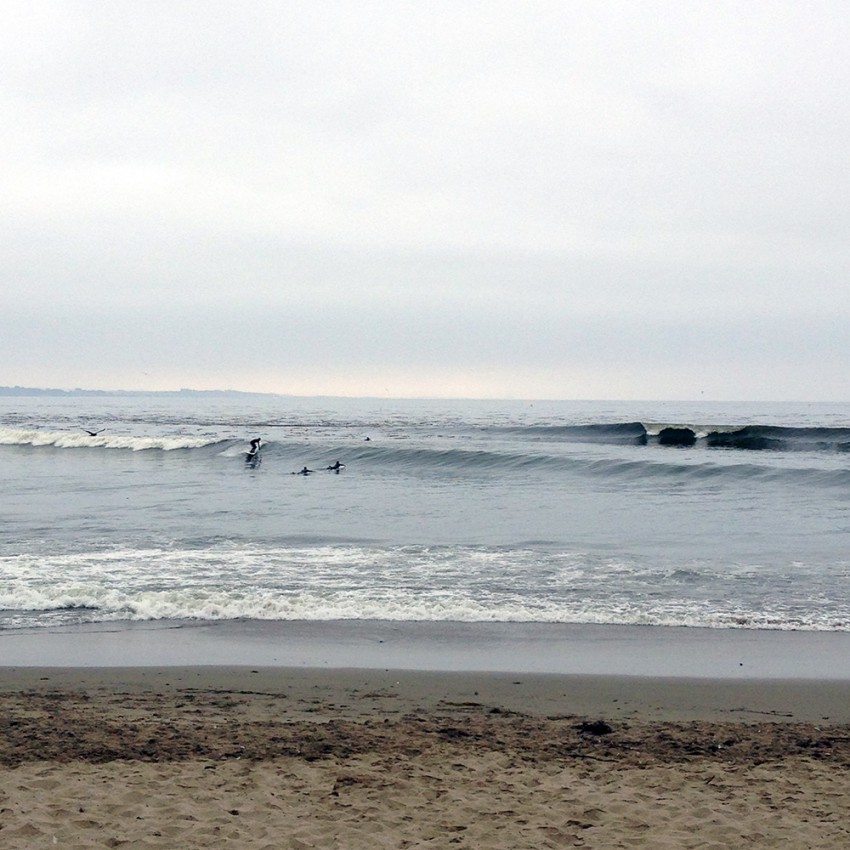 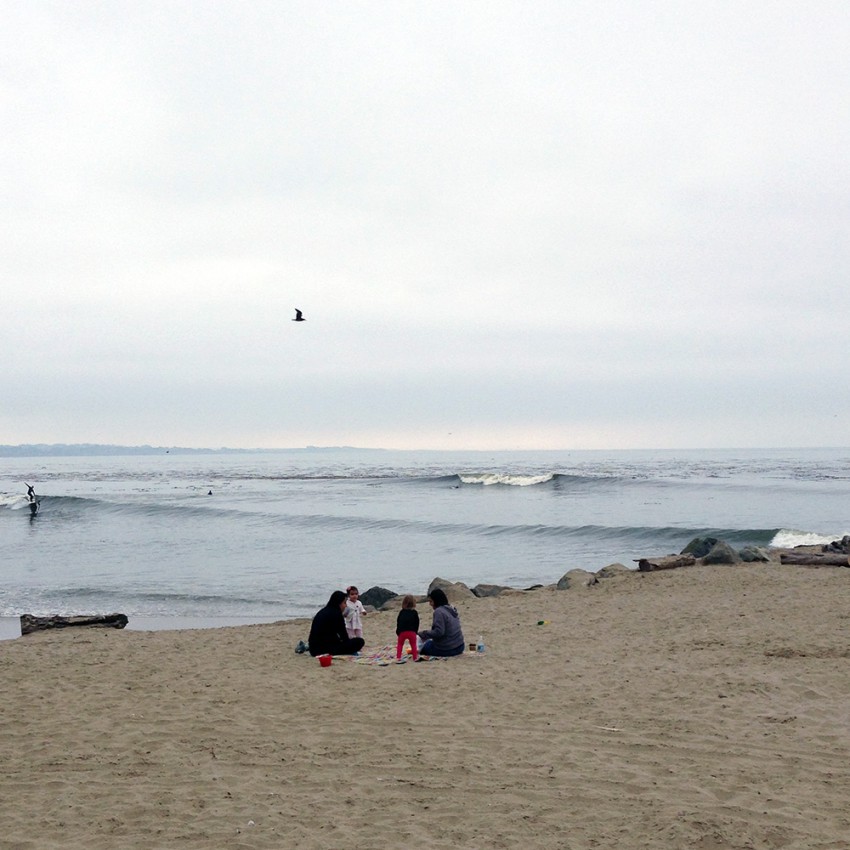 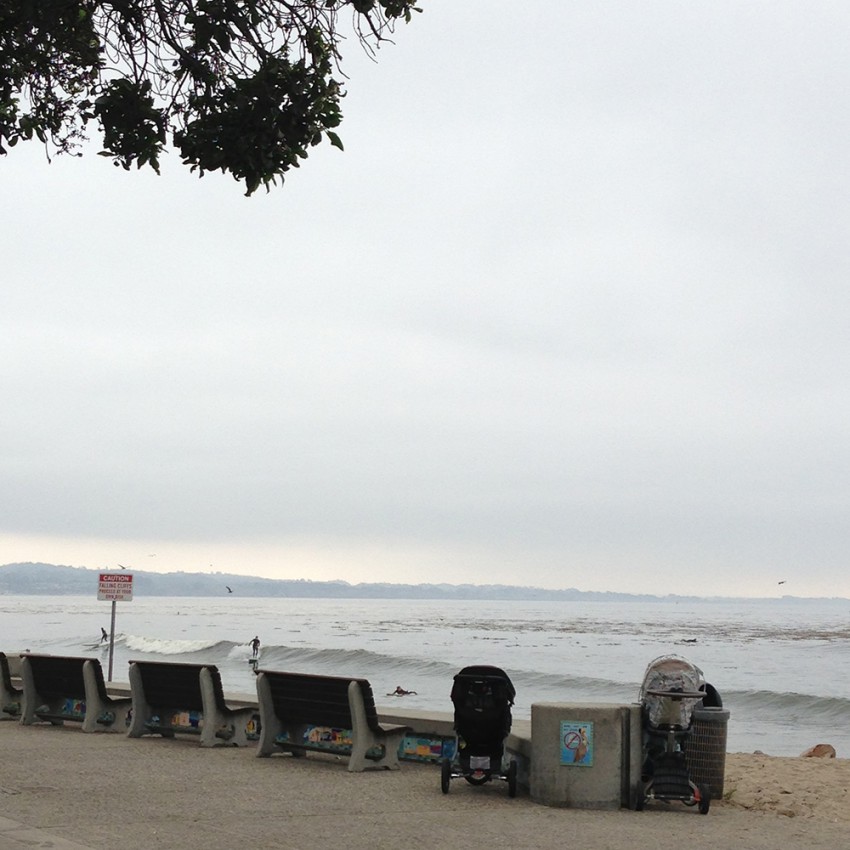 #271 / 11:20am / 8′ Revolver
[Regional Summary: New/primary SSW swell gradually builds in today, while a new/secondary WNW swell has also been building in all morning and topping out this afternoon. Many of the better spots of the region offer waves around the waist-head high zone this afternoon, with occasional slightly overhead SSW sets showing at select magnets. Conditions remains fairly clean throughout town, with more wind/bump out to the west of town. We have a 5.4′ high tide topping out by 4:04pm. ]
2-3 ft
2ft 15s SSW (203°)
1ft 18s SW (215°)
1ft 15s WNW (290°)