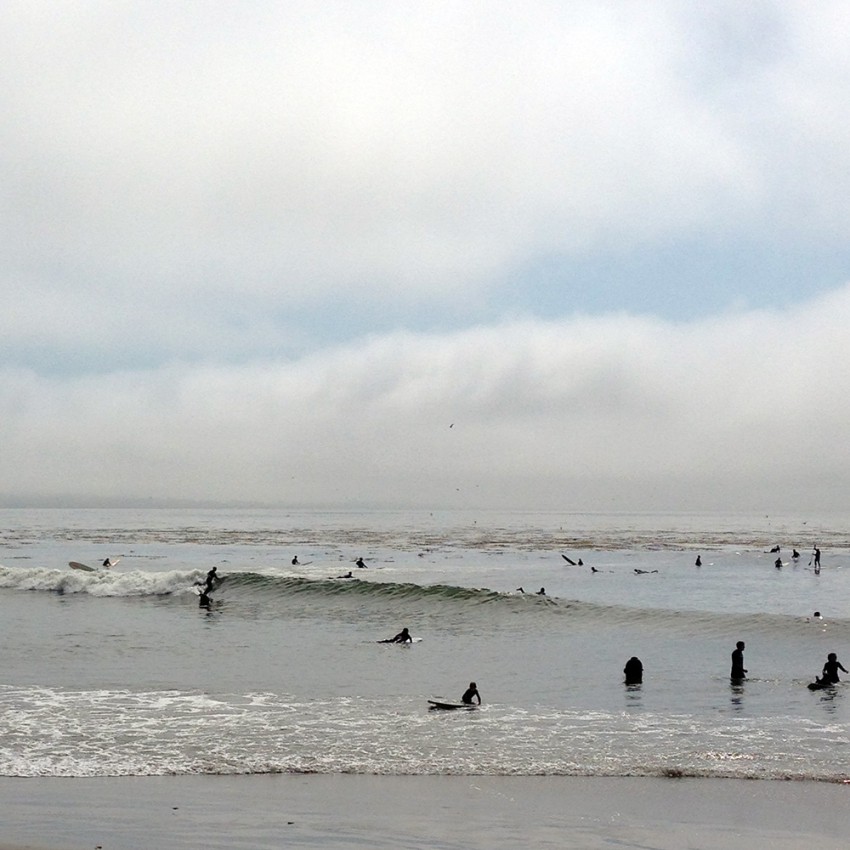 Looked smaller on the cam today or maybe we were just randomly seeing the lulls. When we arrived at the beach, a nice set was rolling through and it looked as good as yesterday but with a much bigger crowd. Saw Tex and Nola sitting on the outside and catching a few big ones while we ate and suited up. They’d split the peak: he’d go right; Nola left. Two classes were also out, one by the cove and one by 1st jetty. A healthy crowd on the inside too. We opted for near the outside lineup. I missed one and had a wipeout early on and a leash-tangle. The waves still have some 16s force, I thought as I took a tumble. Then I started looking for clean ones, avoiding the crowd on the inside and got some of the best waves I’ve had in the next hour and a half or so. One with a super clean drop and turn right keeping a high line, shuffled forward on my board and trimmed all the way down past the cove where I was able to turn down part of the face and catch another section. As I looked all the way down the line, I wondered if I could ride this one all the way to that final section down past the cove… didn’t get there but kicked out and was elated. Got another couple of super long ones where I stayed high and trimmed, turned to connect, kicked out. One that was an unexpected left, then right so I’d end my ride farther south. The paddle outs were those classic Capitola ones – glassy as can be, those brilliant images when you’re paddling out over the shoulder and watching surfers catch epic rights, seeing them takeoff then fade behind the wave as you paddle past. Max was psyched to be out on his 7’10” B5D backup catching rides. Afterwards we ran into Ryan who had a new DFR and had just arrived at the beach. Another epic 2+ hour surf on this first swell of the fall at Capitola. So good.

#272 / 11:20am / 8′ Revolver
[Regional Summary: Primary SSW swell is peaking today, while a secondary WNW swell eases. Many of the better breaks throughout the region offer waist-shoulder high surf, while the standout magnets are producing sets up to head high to slightly overhead. Conditions remain clean for most areas this afternoon, a little wonky for other spots. We have a 5.4′ high tide topping out by 5:16pm.]
2-3 ft
3ft 15s SSW (201°)
1ft 14s WNW (287°)