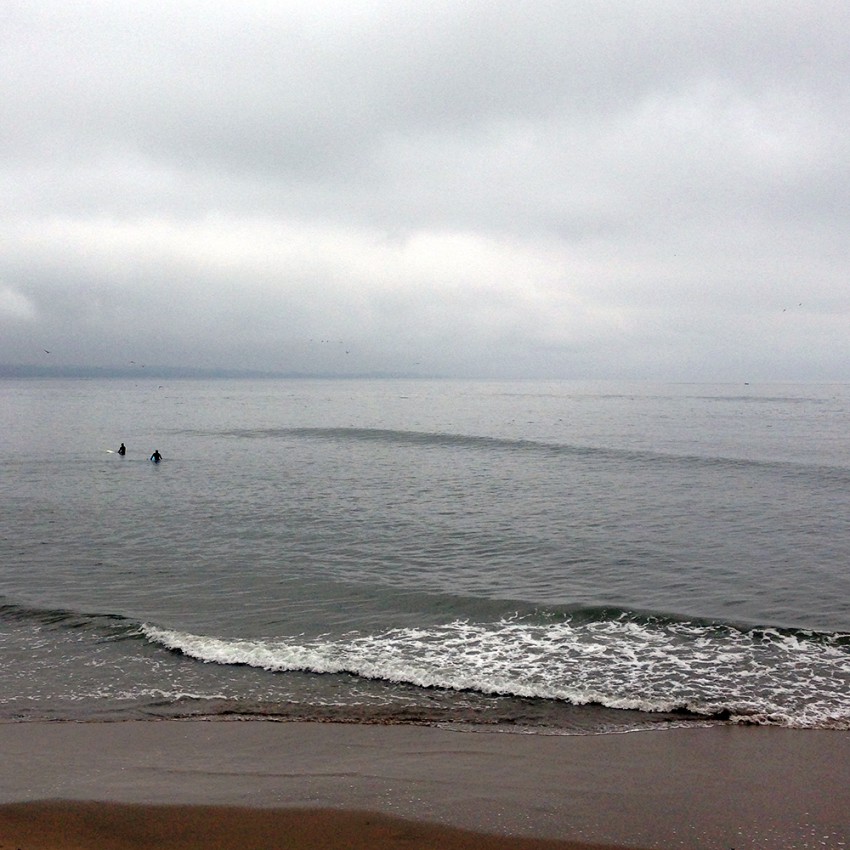 Had so much fun yesterday that we made the drive again today knowing it would be 14s. Cam check in the morning was mostly marine layer but I could see four or so surfers by 2nd jetty and a line rolling through. That got us out of bed and into the Jeep. Chilly at the beach today but also pleasantly empty (before the kid’s Halloween parade at 2pm). Only a handful of surfers out. Some swell was holding up and we saw a decent set on surf check. Turned the heat on while we ate to warm up my feet. Changed into my still-wet-and-cold wetsuit as quickly as possible. On land, a wet wetsuit on a chilly day is cold, but you’re warm again once you’re in the water. Paddled out and within moments, a nice wave approached and Max got a sweet right. So great to see him catching lots of waves on his performance 9’6 Pearson. I got the next one and zipped right all the way south. The marine layer hung above in the sky and the water was gray and glassy. Everything was some shade of gray blending from sky to horizon to the water. Glassy. Some surfers spotted whales in the far distance. A seal and later seal and a baby hung out just outside the lineup. The flocks of seabirds were far in the distance today, out past the wharf towards Privates. Fun group of surfers out today – Asian father and son with his friend. Smiling, laughing and shooting GoPro videos of each other. The teenage girl longboarder who was catching long rights just to the inside right of me several times. The mellow guy on the old O’Neill board.

Max and I got so many sweet waves. Some that were small but steeped up just enough to give you a push and enough time to turn right, pull up and cruuuuise. Others that were bigger with a fast drop. Those were the ones that you could spot behind the first wave. Paddled farther south to meet the peak as it curved while coming in, paddle hard, catch it and zip right. Others that looked like they were shaping up, you’d paddle, but fall of the back as it wasn’t breaking until farther in. Lots of empathy among the lineup when that happened. Totally looked like you were going to get that. Right?! I got a wild wave near the end that just kept going, connecting to that s-curve wave by the cove – all face – just a smooth path of a wave, perfectly curving and just big enough that I could turn and hold my line along it. I rode it in disbelief. Everything in motion. This perfect wave and my board feeling like an extension of me.