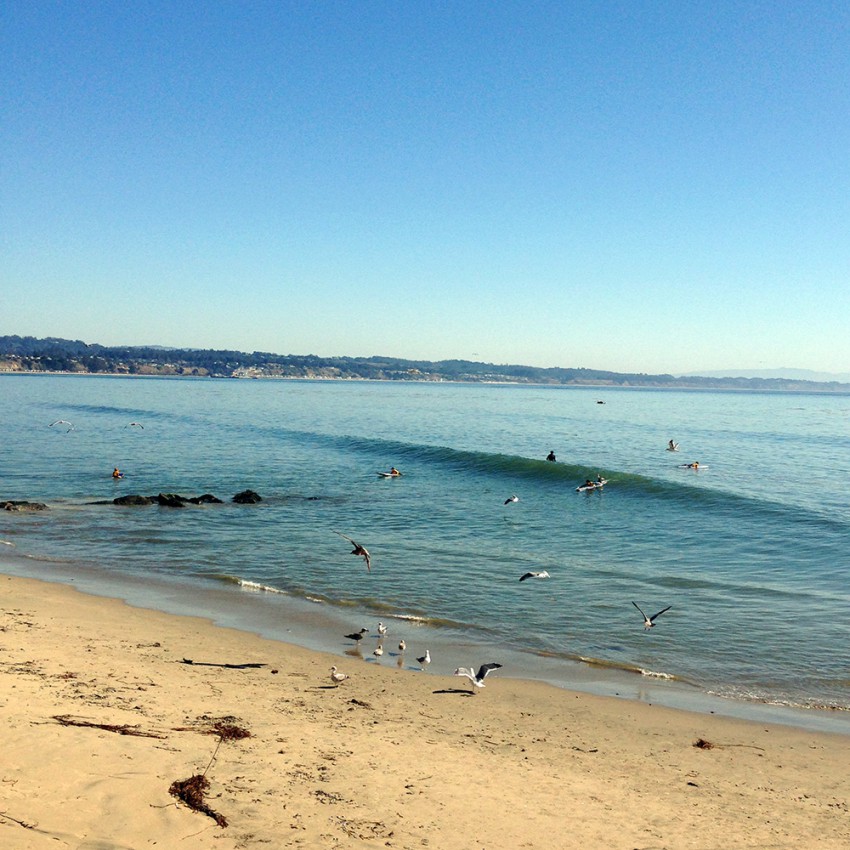 We got down to the beach just in time before surf team practice. The full moon is bringing extreme low (4:45am) and high tides (5′ at 11:30am) and we were counting on the window of time around 2pm, 2′ and dropping. 78 degrees and sunny on a Friday afternoon. It’s been hot in SF too. So many seabirds everywhere in the sky and in the water. On Lawn Way, the grass was covered with little gray and white feathers. The sandy beach between 1st and 2nd jetty was covered in little fish heads and guts. Wild looking and smelled strongly of fish. Max thought they were sardines. Bits of fish parts floated on the surface of the water on the paddle out and in the lineup too, along with a layer of oil on the water. Literally the first time I haven’t dunked my head in voluntary when I paddle out, and instead tried to keep my head out of the water as long as possible today. While the fish and bird invasion made Capitola seem different, the waves as familiar as ever. Small SSW lines came through consistently and Max and I had our pick of waves among a few beginner surfers and one particularly stoked kid. He had just caught a wave where he was on the face and “not a white-watery one,” as he described. Awesome. Max’s left foot has been hurting but the water seemed to help and he wasn’t having trouble catching waves on the 9’6 Pearson. I had lots of fun little ones, where I could kneel down and touch the wave. Some swoopy ones. Lots of paddle-to-meet-the-peak on the inside and catch it. The last two were the best. A left and a right. Waited to paddle at the last second, did a few strokes, and popped up in the direction it was going. Fun and fast. Ate a tofu burger from New Leaf, picked up Max’s other Pearson from BE, and headed to the hotel.