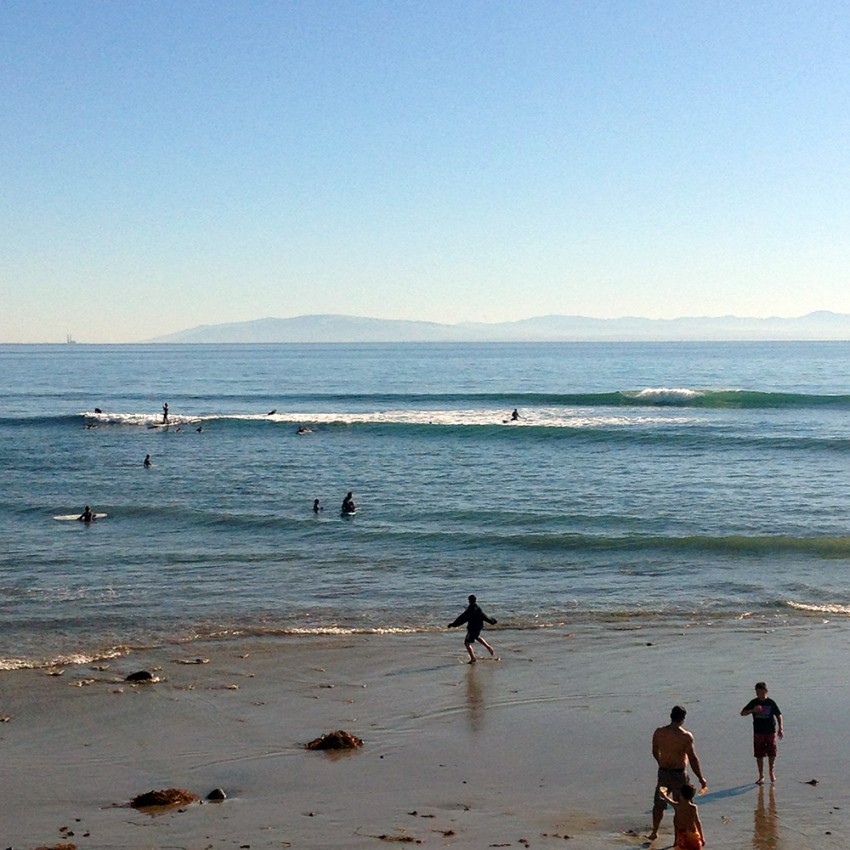 Sunday during winter holiday with sunny skies and 70 degree weather meant that EVERYONE was at the beach. The lineup was filled with a billion kids on their Wavestorms sitting on the inside. Meant that if you got a rare outside wave, you’d have to dodge at least twenty kids to get through. Good practice for Waikiki :) Yesterday’s swell had diminished. Smaller waves, longer lulls. Still, it was a gorgeous summery day. Max made the first wave he went for on his 8′ O’neill Intruder. WOO! He had fun on the board and now we have similar 8′ hybrids to ride. After all his board variance the past few months, it was great to know he has this one that seems like the right transition board. I got several fun waves, though much shorter and smaller than yesterday. Lots of rides fizzled when they hit the trench. Did get one rare outside wave near the end of the session and went left for a bit. Also a nice right with some speed from the middle. No gloves today. Wonder if there will be any swell left tomorrow.

#296 / 2:45pm / 0′ rising / 8′ Revolver
[Regional Summary: Long period WNW swell begins to fade slightly throughout the day and is strongest early. There is also a small NW windswell in the water in response to a rise in NW wind up the coast that should help the shape a little at the more exposed beachbreaks. Wintertime spots are still running in the shoulder to head high zone this morning with some plus sets up to a few feet overhead, especially up North. Be on the lookout for signs of a new NW swell as some long period forerunners creep in later in the day. The tide just peaked at a deep 6.11 feet at 6:53am and may cause some spots to be a little sluggish early. Look for that to improve later this morning/early afternoon as the tide drops to -0.54 feet at 2:02pm. Light offshore winds are providing really nice conditions right now.]
1-2ft
2ft at 15s WNW (290°)
0ft at 9s SSW (191°)
0ft at 12s S (180°)