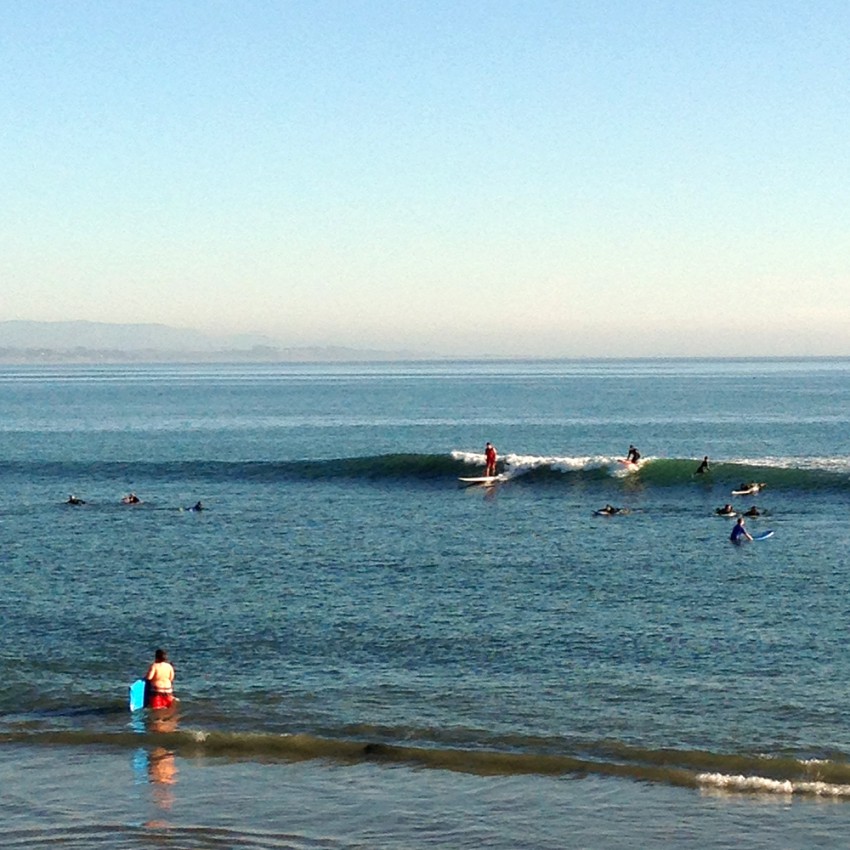 Busy first week back at work meant no surfing for five days since Hawaii. Slept in this morning, then jumped in the car and drove from SF to Capitola, just in time to catch the 2′ dropping afternoon tide on a new building WNW swell. Didn’t account for the crowds at the beach but then, it’s a sunny 74 degree Saturday in January… parking took a while but we finally lucked out with a spot by Zeldas. Surf checked revealed a crowded lineup but some good waves coming through. Could see some power and waves on the outside were about chest-high. Fun! The revolver felt strange today for the first time. I had to get used to it again. Was paddling too far back. Felt like the fin was missing. Felt like lots of water vs. Waikiki water. Everything was new again. Got some fun rides near the beginning when an outside set broke and reformed. Got blasted in riding some foam and one where I outran it going right. A couple of long lulls, but the sets were picking up and swung south with a shifting peak. Got a really good outside one, made the drop, then somehow fell off the back of my board. Argh. Weird that there was this period when we lived here last year where every session was great and always felt like I was progressing. Recently, some regressions, oddities. Without daily surfing, it’s more start and stop. Sometimes epic; other times wacky. Gotta get back to regularity. Anyway, back to today. Some beautiful moments paddling back out through a set, all the way left to get on the shoulder, watching each wave roll through with a surfer, water spraying, sun glistening behind everything. Near the end I got my best wave. Rolling in from the outside, rising up and I was in just the right spot. Caught it, clean drop and turned right. Rode it all the way in. That wave felt like one of the ones from the past – smooth and controlled. More of those, please. Max had a good day on his 9’6 Harbour for the first time in a year. Now we match with our red single fins :) Tomorrow’s supposed to be 3-4′ with swell filling in. We’ll see how it is in the morning.