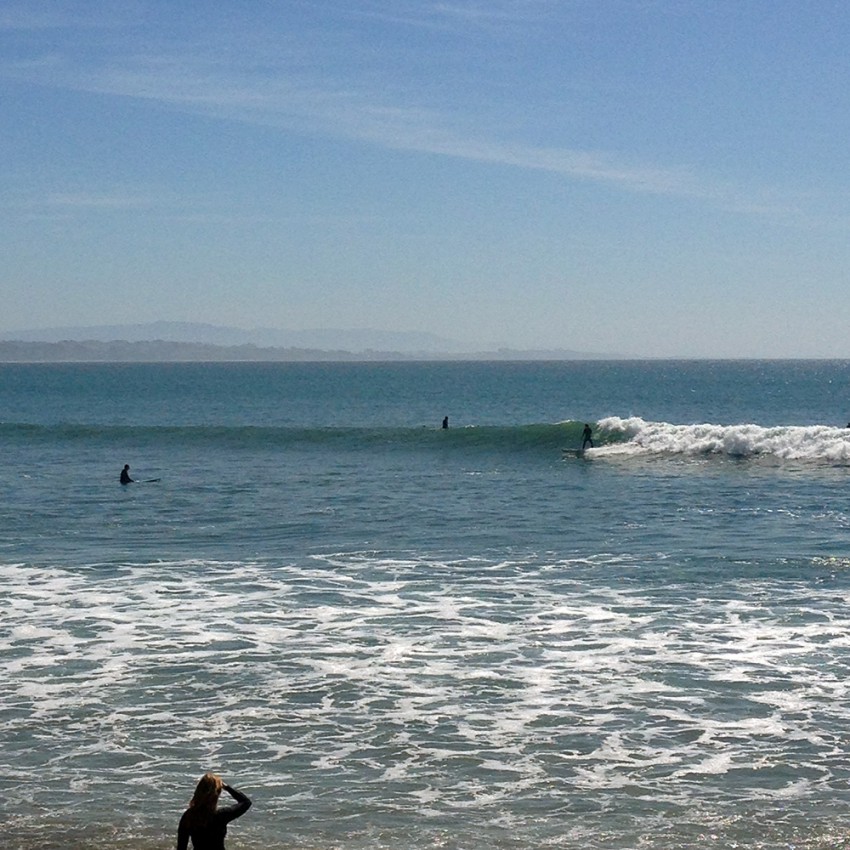 Haven’t surfed in too many weeks because of rain and crazy work life. Missed last weekend in SC and wasn’t about to again. Slept too late like usual but still rallied and got down to Capitola by 10:30. High surf advisory for tonight through Monday evening so we expected to see the start of the new swell. Sure enough, it was here. Long lines at Capitola. Pretty steep starting almost to the wharf to 1st jetty where a lineup of surfers appeared as the tide continued to rise to 4+ feet at 11:41. Usually that’s where kids boogie board. Today, shortboarders and a guy on an Ebert were going for waves. We waited out the high tide and ate our sandwiches and enjoyed the blazing hot, busy Sunday at the beach. Surf check an hour later and everything had shifted. Bigger lines and steep walls of reforming wash rolled through. Saw a shortboarder do maneuvers like a pro, getting lefts and doing hacks off the lip. On the outside, the guy from earlier on the fish, got a long right with smooth turns and a cutback. A longboarder looked like he was about the get barreled on the far outside with a long ride all the way down to Bombora. Wow. With some trepidation, we agreed to paddle out and catch an inside reform, at least. There wasn’t much of a beach, the usual sand covered with water and the beach covered with people. Waited through the set for a lull, then I paddled fast to the outside of 2nd jetty. A guy ripped by on a steep right, on a Wavestorm, no less, as I paddle out. He ended his ride and said, “you’re not supposed to have that much fun on a foamie! It’s my daughter’s board!” I replied, “that was an awesome ride. I’m just staying to alive out here.” He laughed, then shouted, “this one, this looks like a good one!” I paddled out to meet the wave as it rose and slightly hollowed out, sat up on my board, turned and paddled for it, catching a fast drop. Fast wave. Only lasted a couple of seconds, though, before I was practically on the beach. Bailed. Then ducked under the next four set waves that had broken and were rolling in towards the cove beach and I was just in the impact zone. After that I went for some big whitewatery reforms. Got a couple and tumbled on a couple. Surprised by the amount of force in that rising 3′ 14s swell. Whew. Went up to the beach by the cove and was met by Max, who had been getting some inside rides on the inside of 1st jetty on his 6’2″ Ebert Po (he loves that board now). He got a few more this side of the beach. Then I tried his Po and stood up the first time on a whitewater reform. Board felt super floaty under my feet. Kicked out. Fun! Quite a day. Wish we had more time to surf but it was already 2, parking was running out and we needed to head back to SF. I look forward to a longer sesh sometime without time constraints. Still, stoked to get back out there. Need. More. Surf. 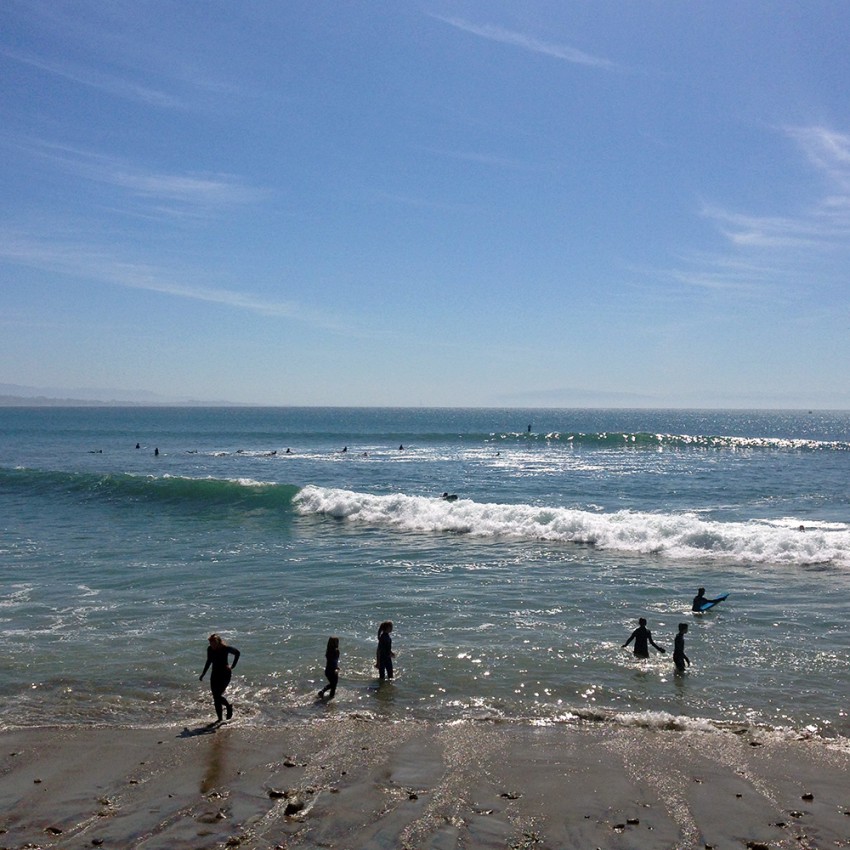 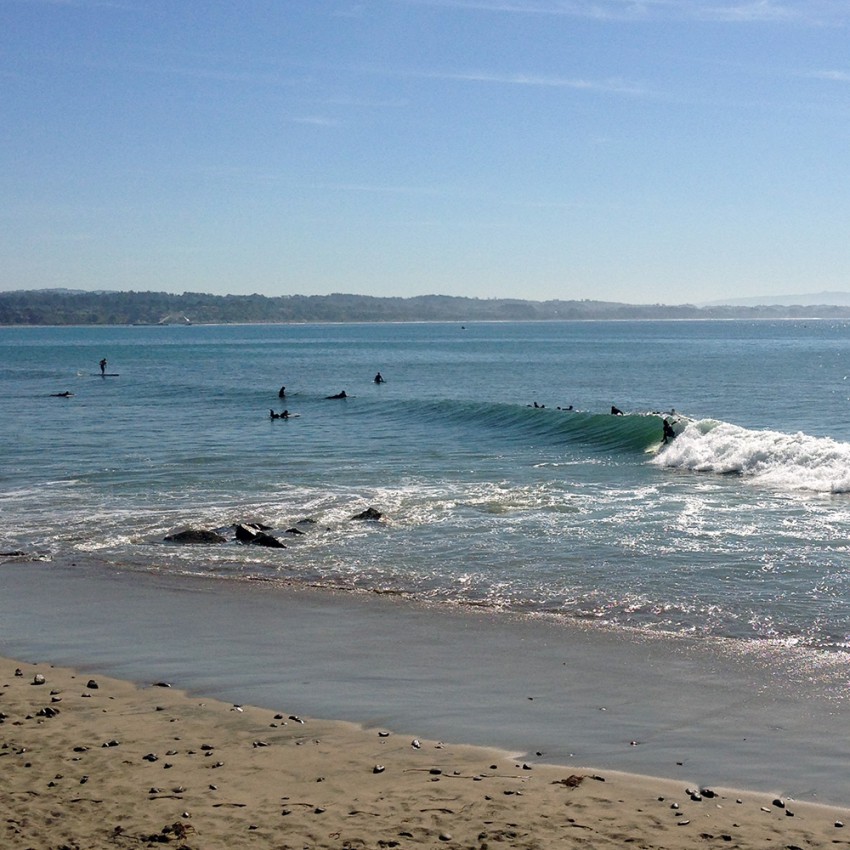 When we first arrived on higher tide. 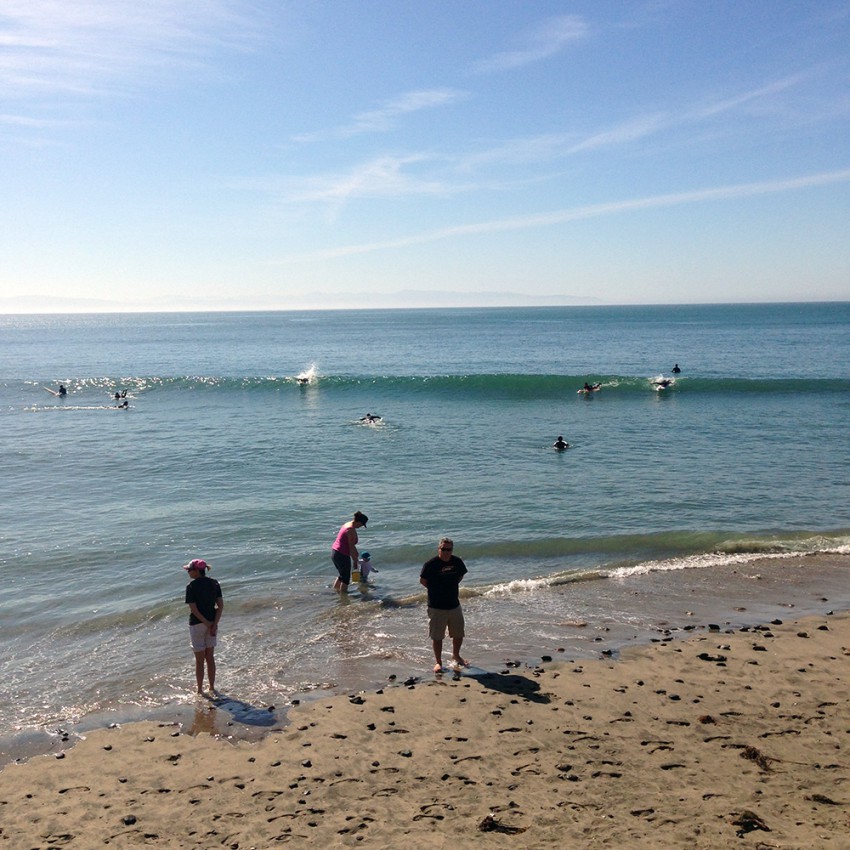