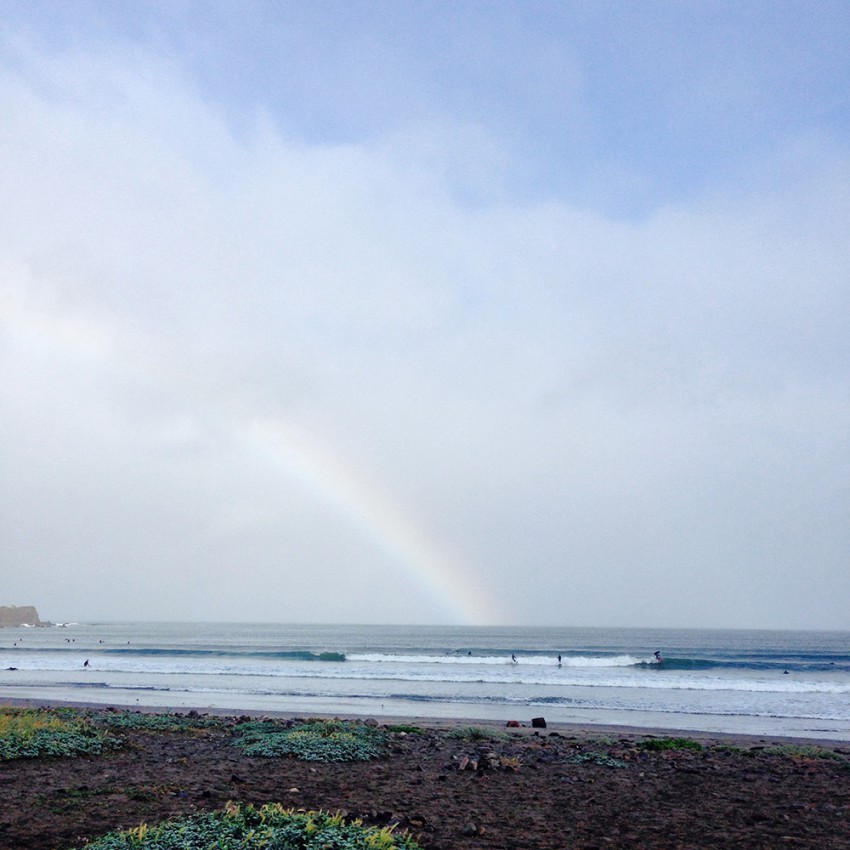 Two weeks out of the water. Work. Windy. Rain. Work. Windy. Work. This morning was supposed to be drizzling but offshore so in spite of wanting to stay in bed, I got up and headed down, while Max caught up on his sleep. Parked in the south lot and lucked out with a beach-front spot. Some crowds out but it looked manageable. Steep and closing out here and there but there were some corners and the rare SW offshore wind made it seem better. Watched the guy with a white helmet catch a bunch of short rights in between the two lineups. Planned to head out there. Saw a shortboarder catch a steep one and do three turns and a floater. A woman longboarder kept getting short lefts and shuffling her board. She even ran to the nose on one. Ate and suited up. Wow, the water was cold on my hands. Not sure if it’s my time out of the water, or upwelling or what, but my hands never get cold and today they were. So cold. Sat on the outside near the old guy who entered when I did. He managed to get a couple good ones. Went for a few that didn’t break. Lull ensued as the tide rose to a high. Moved closer in, paddled farther south. Finally got a good one and swooped right and rode it for a bit. Stoked. Paddled through the closeout inside set. Hands were frozen! Everyone near me had their hands in their pits. Got another right more north than the original spot. Loved having time to adjust and get in tune with the ocean. Far out at Pedro Point, sets would roll through. To the far north, the giant rock was being hit by waves, sending giant spray up in the air. Love offshore mornings. Fun to turn around and see the spray shooting everywhere, sometimes with surfers heads paddling back out through it, other times, boards flying up. Occasionally, a shortboarder on the inside would catch one. Lots of female Asian surfers today. Friendly crowd. Moved farther in and got two short rides. Stayed out for 1.5 hours until I was cold, hungry and happy. Sun came out right at the end. Really needed this surf. Drove home to get breakfast with Max. ♥