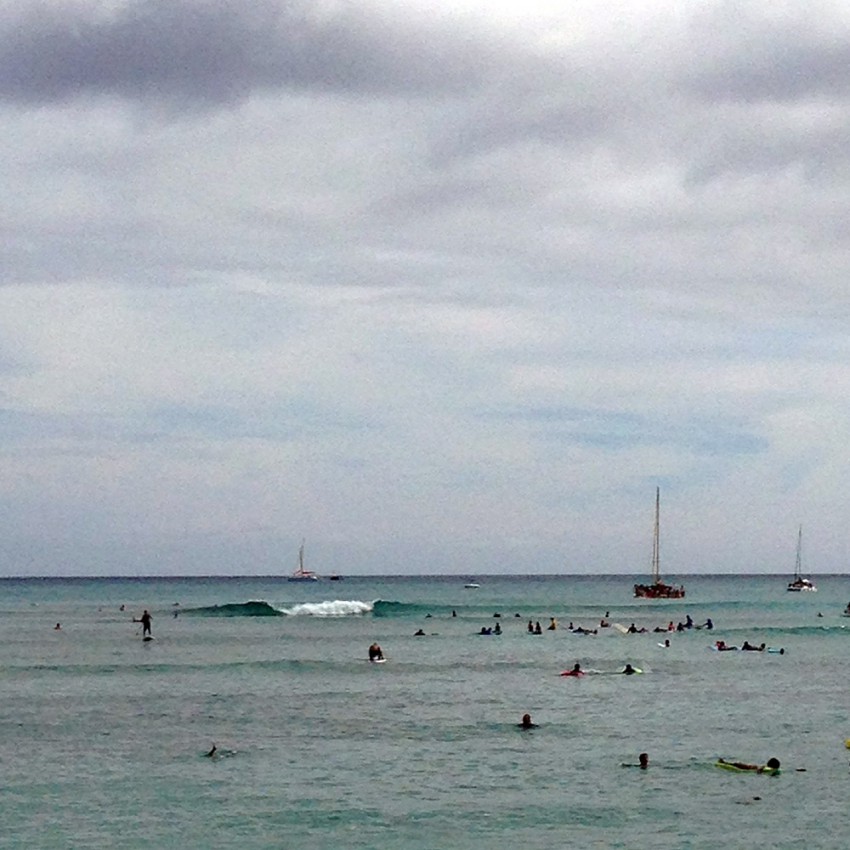 Had to check out of the Hyatt and back into the Marriott so we got a later start this morning but still were at the beach and ready to paddle out by 11:30. Feeling fit from surfing and walking every day. Less of a crowd today given the overcast skies, some showers, and probably some hung-over folks from July 4th partying. We hit the high tide lull for a bit at the start and sat on the outside waiting, waiting. But just as I said to Max, “hmmm, lots of lulls today and maybe kinda flat…” a long line of a wave came from the right and I stopped mid-sentence to paddle to catch it. Turned out to be a fast, super long right, with another Asian girl to the right of me several feet away. We both sped down the face, keep close to the curl and keep going and going and going all the way until we were near the swimmers by the beach, practically where I had just paddled out from. So good. Quite possibly the longest wave I’ve gotten here all the way from the outside all the way in. As the tide dropped a tiny bit, the waves started picking up again. Had to do some careful picking to find a line through the inside crowd, so I had to give up some waves. But I also got so many waves lined up in between the towers that I can’t complain at all. Lined up to the left tower, the left was working if you picked the correct wave. I got two of those fun lefts. On another wave, as I started to paddle, I could see a big honu under my board! After an hour and a half, we started getting hungry. After some lulls, another set started up and a perfect one was rolling towards us, steeping up. Saw a clear line between people and paddled hard, got the wave, slid down the face and went high and right. Max later said he just saw the top half of my body, my hair blowing back in the wind and could see me flying right. I kept going along the face, swooped a bit left, then right again to catch the reform. Was high up on the wave as it reformed and then in front of me about 15 feet away, I saw Tony Moniz with a student. He held up his hand in a stop motion. I debated for a split second whether I should stomp on the nose and push my way down the wave and go left, but in that split second, I didn’t know if I’d make it and the last thing in the world I would want to do is run into Tony Moniz! So I jumped off, grabbing my board and waved at him. “I see you,” I yelled and smiled. A few minutes later, he paddled past and said “Thank you. That was so nice.” I said, “sure! Are you Tony Moniz? It’s so great to see you in the water. You’re such a legend.” He said “I am! Thank you” and paddled by. So cool to know that you can run into any famous surfer here in the water. Such a crazy wave too. Still getting adrenaline from the memory of those rides. Surf, eat, surf, eat, sleep, repeat.