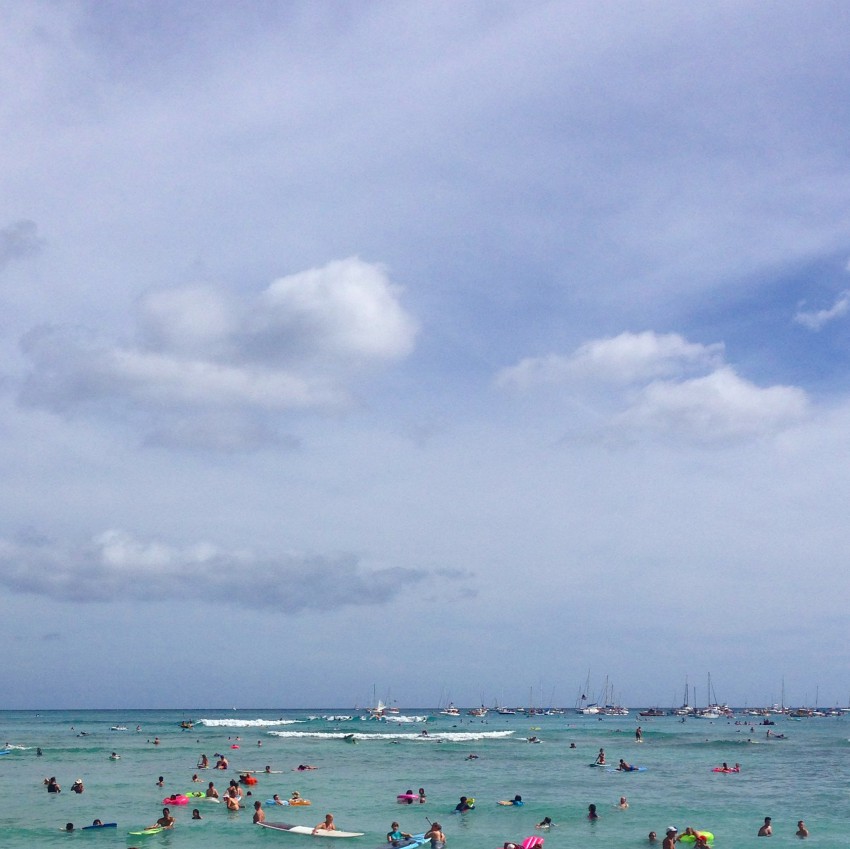 The July 4th scene in the ocean by the afternoon. Luckily we surfed earlier :)

Sleepy but got up to beat the July 4th crowds. Ate quickly and stopped by Koa to get Max’s board out of the locker. Made it to the beach by 9am. The canoe race was on sectioning off everything over past left tower so the lineup was pretty tight, even at 9am. Instructors, families, locals, kids, tourists. All in good fun. Still, I saw some pretty close run-ins, including one fly-away board shooting straight for a girl’s head and missing it by less than a foot. We chose carefully. Early on, it was hard to pick the right moment with any clear line through the inside. Got a couple of short ones. Paddled for lots that didn’t pan out. Later, started lining up more in the middle of the crowd and managed to get two really good rights and another really fast, long one. Tony, the board rental guy, was out teaching and once when I was paddling back out, I saw him take off on one and do a switch stance at the top of the wave to go right, looking very graceful in spite of his (kinda large) gut :) The waves were better today than the past few days, with more size and more frequency. A result of the higher tide? The tide only varies by a couple of feet here so it’s different than home. Water feels so good in the morning. Could’ve stayed out longer but we had to head back to check out of the Marriot and into the Hyatt for a night. Wanna get out even earlier tomorrow, but also need sleep #surferproblems

1-2 ft- knee to thigh high occ. 3 ft.
FAIR CONDITIONS
SOUTH SHORE AM UPDATE AND SHORT TERM FORECAST: Slight reinforcement out of the SSW direction maintaining some fun little surf for town shorelines on this beautiful Independence Day. Waves are in the knee to waist high range with some inconsistent larger sets at the better exposed locations. Watch for this small swell to to hold throughout the holiday weekend. Mostly sunny with some isolated showers in the morning. East winds 10 to 20 mph with some higher gusts in the afternoon hours. Chance of rain 20 percent.
1-2ft
1ft at 10s S (183°)
1ft at 14s SW (215°)
1ft at 9s SE (149°)