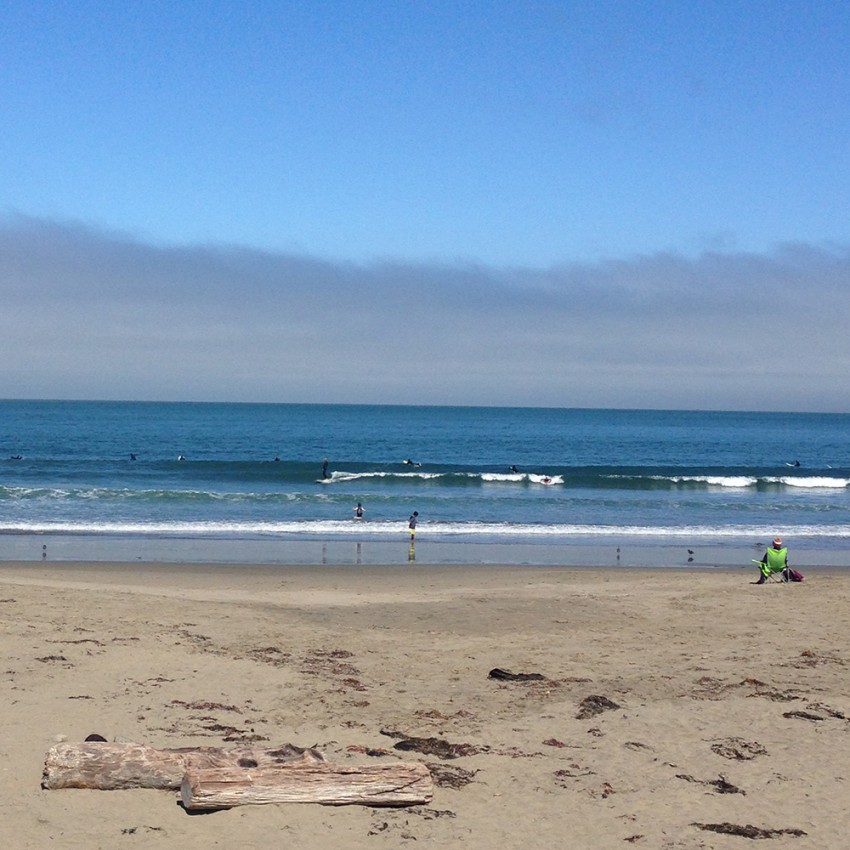 Sooo excited to have the day for some R&R. Had planned to go south to Capitola to catch some possible 2-3′ SSW and mis-remembered the time so we got up at 7 then saw that 2′ rising wasn’t until 10. Back to bed for an hour :) Decided to skip the long drive (and didn’t look like the swell had materialized through the marine layer) and opted for LM instead. Though there was some wind, it was warm and sunny and the waves looked small and mellow. Crowd wasn’t too bad but started to grow around noon. Tide was still rising so the waves were often closer in, but a fine line between too close or too far out, and ones that broke or didn’t. Occasionally a bigger set would come through and waves would break farther out than the line up. Mostly, it was just fun catching waves. My favorites were the rights that appeared from the north and started shaping up slowly and if you were lined up to the farthest right cyprus, you could just start paddling early and catch a sweet, long right. On one of those, I even got to pump up and down a couple of times before it closed out, then went left and managed a semi-fluid kick out. Wee. Thoroughly enjoyed those three rights. Got a bunch of short rides with little drops. Also had a classic LM wipeout where I got pitched and just sorta dove head-first into the water. Max got a bunch of rides on his Mitsu too. Wind changed to onshore at some point and it was all spray paddling back out or paddling south to stay in position. We stayed out until hunger kicked in. Fun sesh.

2-3 ft +- knee to chest high occ. 4 ft.
FAIR CONDITIONS
PM Report and Short-Term Forecast for SF-San Mateo County: Long period energy from both the NNW and SSW are mixing with short period NW windswell to provide consistent waist-shoulder high surf at most breaks while swell magnets see some head high+ sets as well. Steady SW wind is adding some texture to the surface at exposed breaks, while more sheltered options are just seeing light texture. Tide rising to a 6.2′ at 3:21pm, then drops out to around 1′ after dark. Look for onshores to continue to pick up and swell to hold all day.
3-4ft
2ft at 7s WNW (310°)
2ft at 9s WNW (293°)
2ft at 15s WNW (282°)