Had Friday breakfast at the beach yesterday but skipped surfing for the first Friday in a while. Tiny, high tide conditions and we would’ve had to rush to get back in time for meetings. This morning we planned to get up at 6 but instead snoozed until 8. Finally got up and headed down to Pacifica. There was a dense fog advisory and a beach hazard statement. In spite of that, there were still hundreds of surfers out in the water when we arrived with bigger sets on the north end and the WSW swell spraying water into the air near the headlands. We saw a guy in the distance catch a left at Pedro Point. Middle to south were packed too. The horizon to the inside was masked in fog. Ate and suited up. Thought we’d just paddle out and take it easy. Max’s left arm is still sore. My right is better but a tiny sore too. Bigger today than it’s been and the goal was to avoid all closeouts. My first wave was wacky and I somehow held my rails and didn’t pop up and wiped out instead. First one of those in years! Paddled for lots that didn’t break. Lots of double-ups. Smaller ones didn’t break until the beach. Bigger ones were chompy. Crowded lineup. Max was having more luck than me today and catching some good ones. My best was the second, with a steep drop, crouched down to make it, turned to avoid the guys on the inside. Got a smaller one on the way in. One of those days where it didn’t look that good no matter where I was lined up. No epic rides but a good workout on the 7’4. 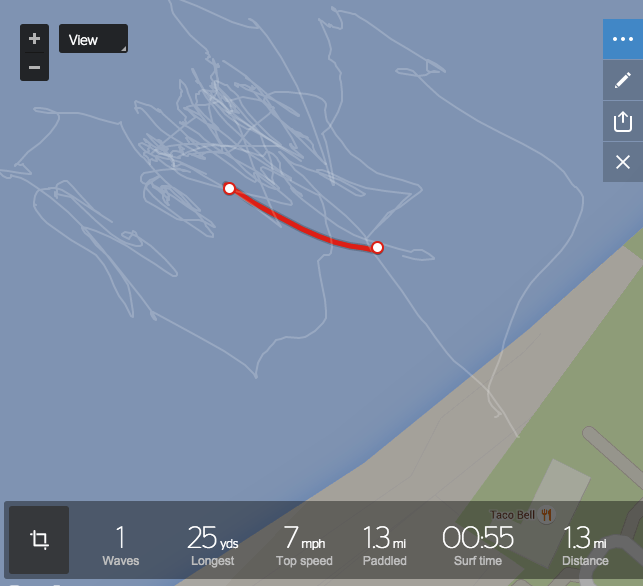