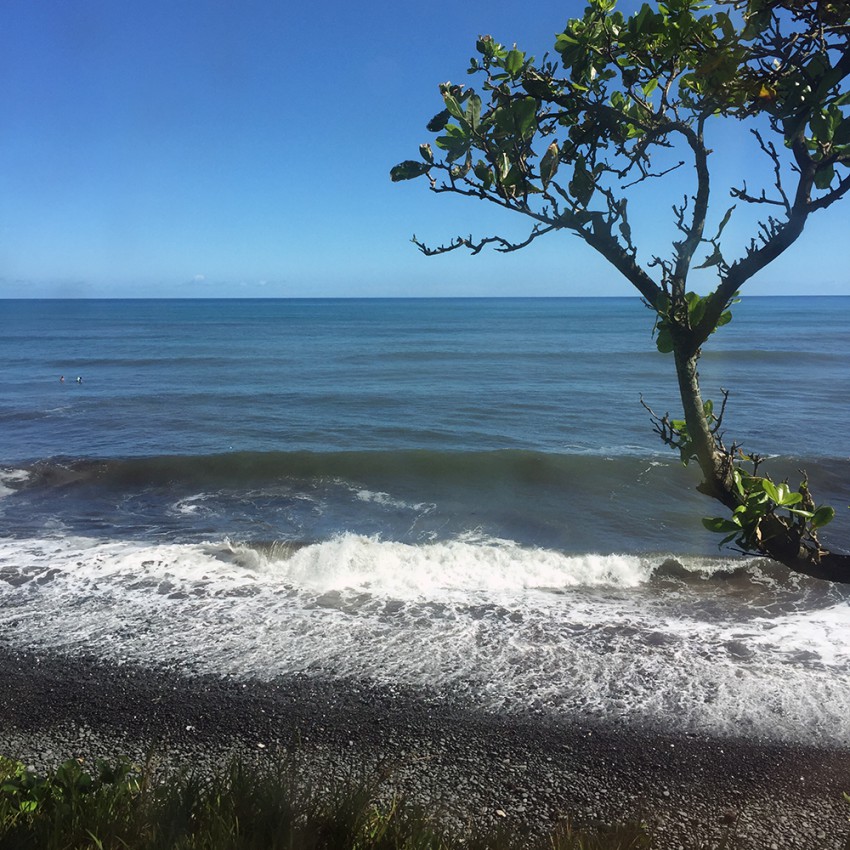 About to head down the cliff to surf.

We finally made it to Tahiti, after a couple of years of delays due to work changes, then moving back to Dow last year. This time, after rejoining the web team last month, it all came together with a week’s window for vacation from Oct 22-29. I found a great deal to stay at the Manava Suite Resort in the deluxe lagoon suite for 40% off. Manava was the best and became our home base for our week’s adventures. We had planned to surf Wed and Thurs with two different instructors but it turned out that the heavy rain brought lots of debris and brown water from the multiple rivers that run into the ocean. We switched it up and flew to Huahine instead, and the snorkeling and island was mind-blowing. Made it back to Pape’ete on Friday night and Claude from Surf Vision Project was available for a Saturday morning surf. We slept just barely enough to get up for breakfast and meet him at 8:20am. Claude was friendly and low-key. Turns out he’s from Reunion Islands and friends with Jeremy Flores, but after the shark incidents and surfing being closed on the islands, he moved to Tahiti to keep surfing. He drove us north about 40 minuts to the Papeno’o region, where we checked out Orofara (which I’d seen on the came years ago), but it was a bit crowded and small, and kept going up to another spot he called Chinese Bay. The watch picked it up as Rocky Point. From the cliff, the waves looked really big, rolling in and steeping up and crashing onto the black rock shoreline. I had some trepidation but didn’t really have time to discuss with Max. Just carrying that heavy Bic board down the hill was initially a challenge and getting out into the lineup seemed sketchy, given the big shore break. I decided that even if he said to go, I was going to wait until the set had flattened. Made it out without incident and the board paddled surprisingly well. Max was on a 9’4 longboard and he paddled out to the lineup fine as well. Claude was on a boogie board with his GoPro in hand to catch some shots of us. He stayed more on the inside. Marked our lineup by the vans on the hill and the island to the right. To our left, several surfers were trying for the left that wedged up a bit. But as Claude said, this was going to be a patience game since we might only get a few sets in a couple of hours. So we waited and chatted, and paddled to keep lined up as the current pushed us to the left. Went for several waves in the beginning and some were just too fat and not breaking. The first one I got was off a breaking outside set and even the foam had quite some power, shooting me forward so fast I couldn’t get up! Stood up for a few seconds before flying off. The first four waves were like that – whoa, here it comes, wow, that’s powerful, pop up! Oops, slid off. On one paddle out, I got pushed back quite a bit towards the beach and the watch counted that as a wave, haha. After a long lull, moved more towards the peak as a set started. Looked like it was going to work and I paddled hard for a wave, felt it catch with speed and popped up, held my line and leaned in harder than I ever had to make that drop and turn right. Saw the wave steep next to me, kept going for a bit and then the shore was approaching and I jumped off the back. WOOO. Adrenaline coursing through my veins and so stoked on that ride, which seemed incredibly fast and powerful. Turns out it was 11mph but I thought it was 17mph only to realize my watch was set to kilometers. Nonetheless, making that last real wave made my day!! Tried to paddle back out through the set but even with rolling, couldn’t make it through the nonstop incoming waves and got pushed over the black rocks on shore. Luckily, I went horizontal to avoid them, then realized I wasn’t going back out through this, grabbed my board and stood up and hustled towards the hill. I saw Claude coming out of the water too and I signaled with a thumbs up that I was fine. He came over and asked if I was ok. “Yes, and I got a great wave!” I answered. He was stoked and said he saw it from behind the wave. Just then we noticed Max had come to shore but probably 200 yards down the beach on the black rocks. He was kind of stuck with his board in the shorebreak and I could see from his actions that he wasn’t ok. Dropped my board and both Claude and I both ran as fast as possible over those rocks to get to him. Claude got there first (with his conditioned feet) and got the board. Max was still in the water trying to get out and finally did, but he was bleeding on his knee and feet. I was so worried. I ran back down the beach and up the hill to the van to get his reef shoes and brought those back to him. The tarmac on the road was so hot I nearly burned my feet. Luckily, no major damage to Max’s feet or knees but lots of cuts. So glad it wasn’t reef! All in all, an exciting sesh surfing a place that’s inherently intimidating for its reef breaks and the powerful waves. I’ll always remember that wave. Maururu, Tahiti! 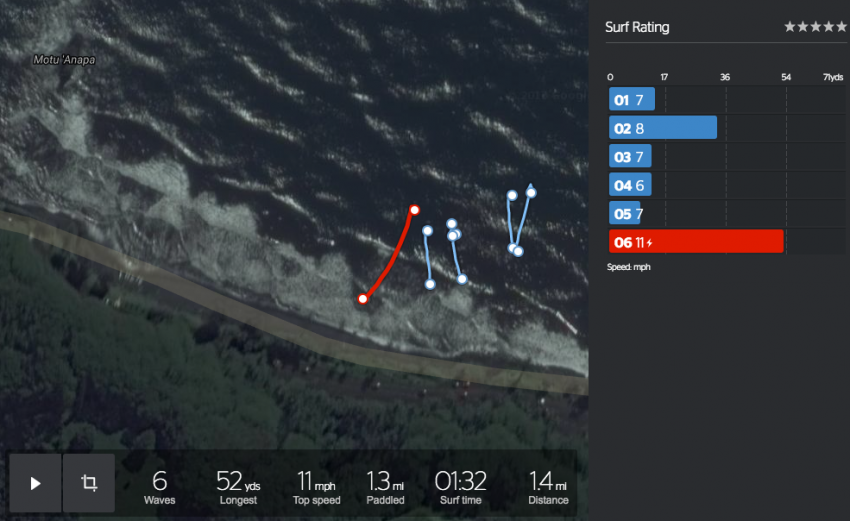 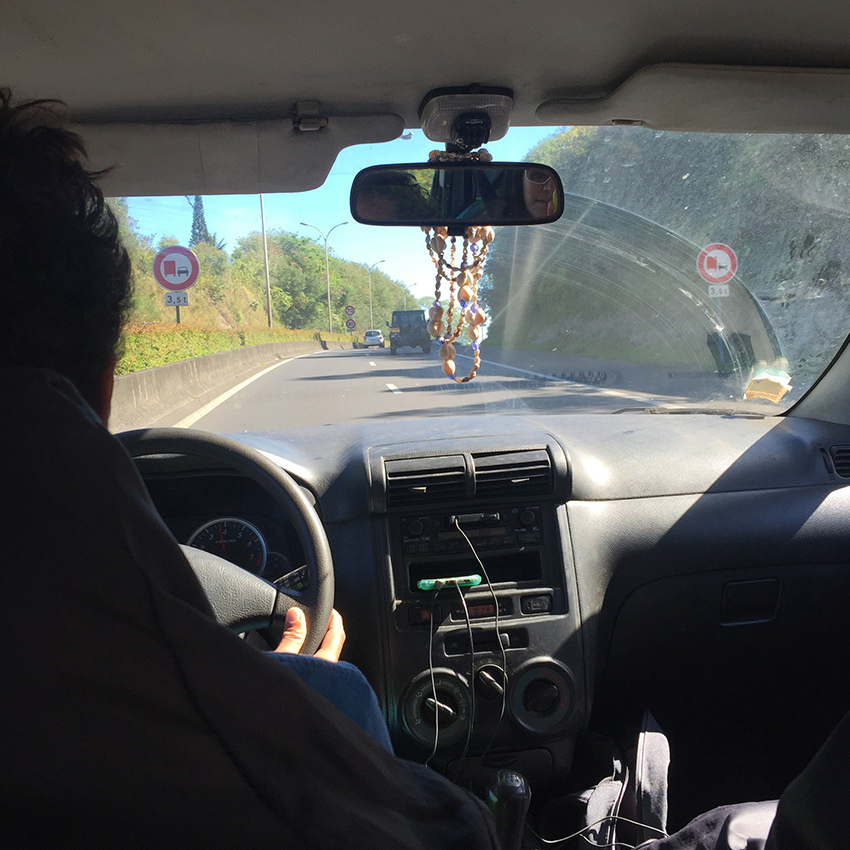 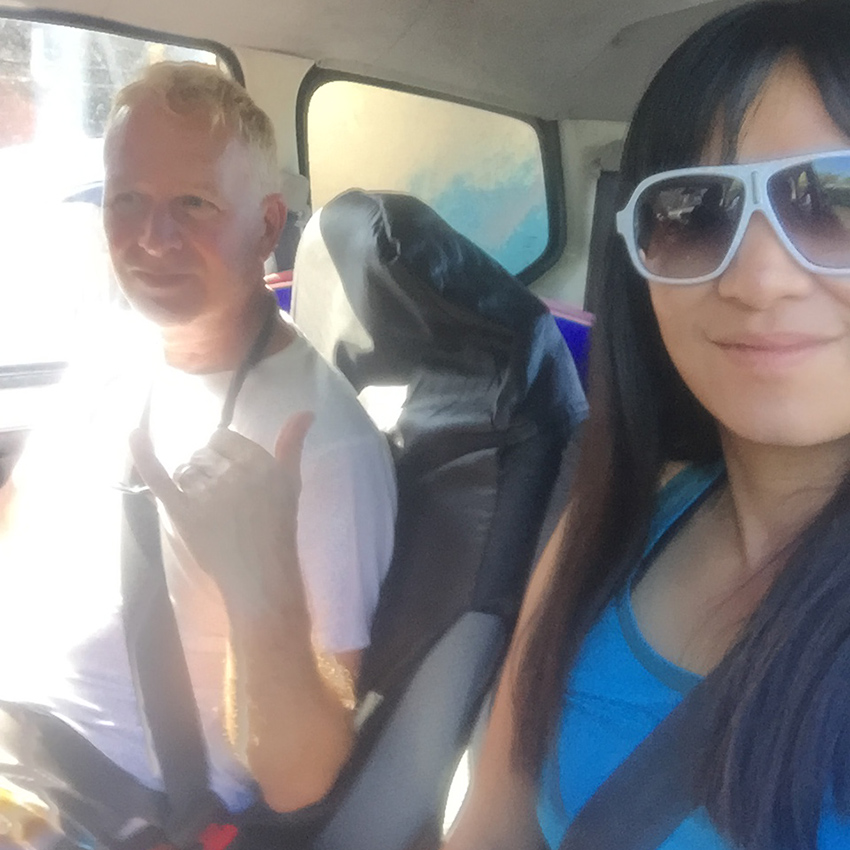 On the ride to Papeeno

Driving by Orafara, another surf spot