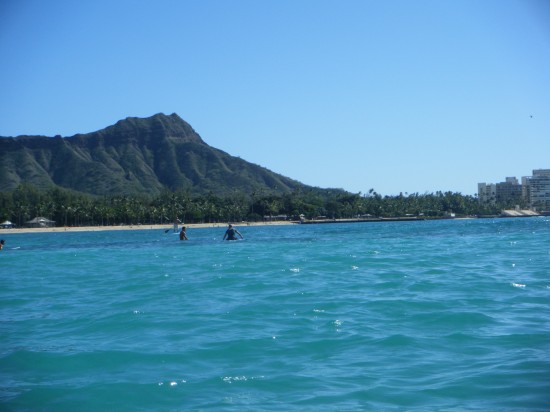 Despite the weather report of 79 degrees, it definitely felt warmer today with the sun shining brightly and no clouds in the sky. We were psyched to try Queens again and made the paddle out easily. After a week of surfing straight, we’re feeling really strong.

The waves were more choppy today due to tradewinds blowing in, and I kept noticing my board was angling right. Max really liked his new single fin setup yesterday, which was recommended by a local surfer, so I was eager to try a single 9″ fin on my Mitsu for the first time. We stopped by Koa Board Sports last night, a cool local surf shop tucked away on Koa Ave., a couple blocks away from the main Kalakaua chaos. The guy that was there was actually the one that designed the fin I purchased by Island Fin Design. He said it was great as a single fin for Queens and turns easily as well. I’ve always done a 2+1 setup on the Mitsu. The single fin felt really different and seemed to push my board at an angle. It’s tricky since the Mitsu board is so much thinner than a normal 9′ longboard. I was wondering if the fin was too heavy for it. I didn’t seem to have as much control over my board, or maybe it just takes some getting used to, but with Max’s T&C 9′ board, as soon as he put a single fin on it, he felt that it was much faster, easier to paddle, and more controlled.

We sat on the outside at Queens and watched a couple sets roll through and I shot some videos of surfers catching some nice little waves. There was a local girl I had seen the other day just ripping it up on her stand up paddle board. Looked like so much fun. After a few, I paddled in and tried for a couple waves, but I wasn’t quite in position for the break that kept shifting to the right. Between sets, I paddled over at an angle to get in position for the next when an another set came through. One of the waves caught my board, turned it, and in a split second, I felt the force and popped up on it and rode it in! Woo! A few moments later, after I had paddled back to the outside, Max caught a sweet, fast ride on a wave while I wasn’t looking. He said it was the fastest, longest ride he’s gotten. Double woo!

We took a break on the beach after a couple of hours. Max got us some veggie chili and brown rice and we re-hydrated and chilled out for a bit before paddling out again. This time, we headed over to the left towards Canoes, since Queens was looking pretty small by the afternoon. Canoes was more crowded than I’ve seen all week, mostly beginners and instructors and probably students who were off for the Christmas holiday. Nonetheless, there were some nice waves. I felt a bit sloppy with my new fin, and my board didn’t seem as responsive as usual. On one wave, I pearled really hard and wasn’t able to pull out of it (something that hasn’t happened since my first couple weeks surfing), bailed and felt kind of silly watching my board go vertical. Got another wave but was heading straight for a kid on a floatie, so I cut that one short. Max was having a great time catching waves farther to the right of me. We met up a little later on the outside and were chatting when a nice set came through. We both went for it, caught the ride, but were way too close to each other, so we both pulled back before colliding. We were pretty wiped by then anyway. Fun day out despite my fin issues. I’m thinking of switching back to the 2+1 setup, which has been great for me so far. Look forward to trying Queens again tomorrow.

[Cool and crisp morning with very small to near flat ocean conditions. Most spots have tiny waves in the ankle to shin high range with a few larger sets at places that grab the northeasterly wrap. Tradewinds are decreasing to more light levels which will continue to provide offshore conditions for southern shorelines.]
[Clif bar, banana before; veggie chili and brown rice at the break; tofu, veg and rice after]