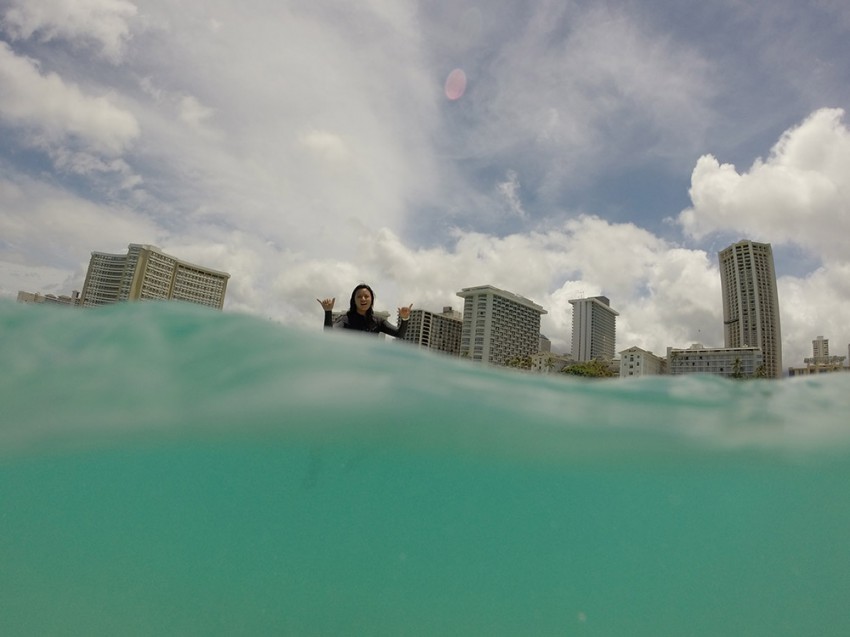 Everyone’s been waiting to see if this southwest swell was coming in and last night, it looked like it sure was, with nice lines coming in all around Publics from our lanai view. We stayed up a bit later last night since we didn’t plan to paddle out until around 11 when it would be mid and rising. Didn’t expect to see such a crowded lineup, but it was one of those days when you looked out and didn’t see a single spot without a surfer. Headed to our left tower spot. Got a smaller clean left pretty quickly with a boogie boarder cheering me on as I paddled and caught it, riding left through to the sandy inside. Good sign, I thought. But then for the next half hour (?) I paddled and paddled for waves that didn’t break, or I was a few feet off the peak, or… who knows. It was exhausting and ironic, given the name of my post yesterday. Just when you think you know the spot, sometimes you don’t. Finally, I decided to move to the spot in between the towers, where it was surprisingly empty. Waited for the next set. Missed one. Then got a really good inside, powerful one that went left all the way over to the sandy spot again. Paddled back out and watched while the Faith surf school class paddled out exactly to where I was, forcing me over. Still thinking I could get some of the waves that rolled through, but kept being just too far left of the peak in that spot that never breaks. Agh. Paddle, paddle, paddle, no go. Try it again. Whew. Tiring. The instructors kept pushing students off and they went flying left right past me. Ok, time for a new plan. Max was still hanging over by left tower, but I decided to move to the inside by right tower and was thrilled to catch a few there. There was a giant crowd hanging farther out, but no one was really making any of those. Still, had to be aware that at any moment, some random surfer could come blasting through. Strange today with the inconsistent swell and tide rising. Lots of water sloshing around and backwash that was visibly shooting back outward while other waves were rolling in. The outside looked good but didn’t often break. At one point, after many failed attempts to catch a wave, I was missing Capitola with its consistent right-hander. Given all that, and all the paddling I was doing today, I was stoked to finally get some rides over there!