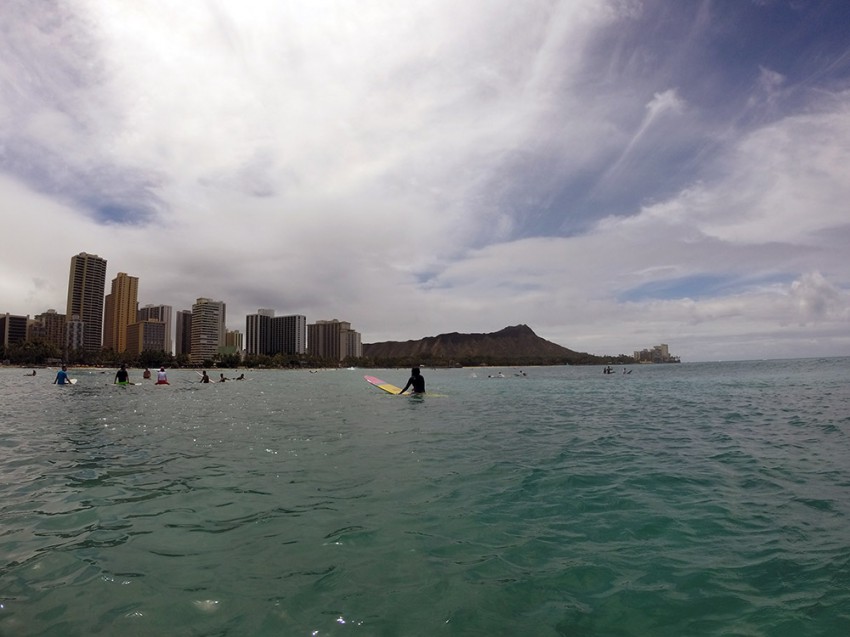 Slept in a tiny bit (it’s vacay after all) and were pleased that it wasn’t too crowded. Tony was back at the rental stand giving me the super-discounted rate ($10 for two hours!). We headed for the outside of left tower. Waves seemed a bit smaller and slower than yesterday, but I got a fun one into the sandy spot pretty quickly. Soon, the canoes were out and we had to do a bit of dodging. Paddled for a lot that weren’t quite breaking but then there were plenty of unexpected good, long ones. The best were near the end over by right tower as the tide rose and we shifted closer in. One in particular where I could see the long face next to me, without anyone on it or in the distance. Just a perfect wave peeling. I did some kind of good turn to pull into the face. Felt great to be zipping along then out of nowhere, lost my balance and fell off! Agh. No worries, there were more waves, but that one sticks in my mind, just because I was in that magic spot for those rights and didn’t ride it out :P After a while, the lulls started as the tide rose. Had to really look for the good ones. The groms were on the inside of the right tower getting waves on their shortboards. I was a bit farther out than them, waiting for the lines that wrapped over. Waited, paddled for one that didn’t pan out, then finally saw a good one coming, got in position, no one in front of me, and paddled hard. Got it and felt the joy of a long, good right.

1-2 ft- knee to thigh high
FAIR CONDITIONS
Aloha, this is Kekoa with the report for Tuesday morning.
SOUTH SHORE AM UPDATE AND SHORT TERM FORECAST: Small surf prevails for town shorelines today but watch for a modest SW Tasman Sea swell (215-207°) to start filling in later today into tomorrow. For now waves are in the knee high range with some inconsistent larger sets at the better exposed locations. Sunny with isolated showers. Highs around 85. East winds 10 to 20 mph with some higher gusts in the afternoon hours. Chance of rain 20 percent.